Vaccination plateau — rapid rise in vaccination rates as percent of population followed by a quick slowdown with the curve nearly flatlining. That is my simple and personal definition as I have not seen other definitions yet when I checked the various search engines. The term has similar connotations to “vaccine ceiling” and “vaccine burnout.”

The best example of a country experiencing a vaccine plateau would be Israel. From the Our World in Data (OWID) excel file, Israel’s vaccination rate as percent of population was 0.1% on Jan. 10, quickly rising to 21.1% on Jan. 31, 38.7% on Feb. 28, and 54.6% on March 31. This rapid rise in the vaccination rate also coincided with a rapid decline in infections and cases, from around 8,000/day in mid-January to only 466 by March 31, then lockdown and mask mandates were slowly removed. And Israel became a poster example of “more vaccination, more protection, less infections.” Good.

Israel’s vaccination rate plateaued in April to June at 58%, with a mild rise to 61% to 63% in July to Sept. 17. Infections and cases started rising in July and peaked on Sept. 1 with 20,500 cases. This rapid rise in cases despite a high vaccination rate has led to a reverse situation of “more vaccination, less protection, more infections.” Israel later ordered a third booster shot for those above 65 years old.

The Philippines is another example of “more vaccination, more cases,” but a mild version compared to Singapore or South Korea. Mass vaccination officially started on March 1 at the Philippine General Hospital (PGH) with Sinovac. A slow roll out, vaccination rate was only 0.2% of population by end-April, 2.4% by end-June, 12.6% by end-August, and 16.2% by Sept. 17. The rise in the number of vaccinations in August and September coincided with a rise in infections, from 5,000-6,000 per day in June-July, it went up to about 15,000/day in August, and about 20,000/day in September. 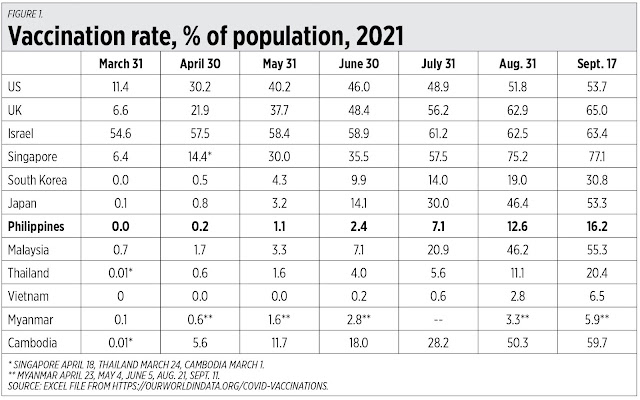 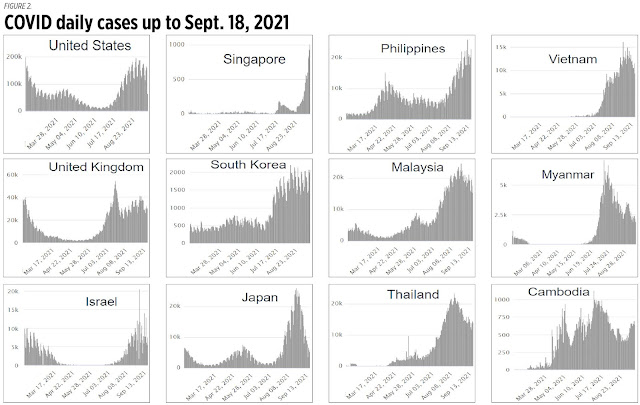 Consider also the following numbers from the Open Vaccine Adverse Event Reporting System (VAERS, https://openvaers.com/). It is a voluntary reporting system and is estimated to account for only 1% of vaccine injuries. It is built from the US’ Health and Human Services (HHS) data (https://vaers.hhs.gov/). As of Sept. 10: there were, a.) 1,519,354 reports of vaccine adverse events, b.) 14,925 vaccine reported deaths, and, c.) 60,741 vaccine reported hospitalizations.

And during the Weekly Huddle of the Concerned Doctors and Citizens of the Philippines (CDC PH) on Sept. 11, Dr. Jody Dalmacion, an epidemiologist and retired faculty member of UP College of Medicine (UPCM), said that the current numbers on VAERS are unprecedented in global medical history: a.) COVID-19 vaccine-related deaths in the US are 4,400, higher than all other vaccine-deaths in the last 20 years, b.) COVID-19 vaccine deaths in Europe are more than 10,000, c.) there are 14,000 hospitalizations.

The numbers in Figures 1 and 2, the Open VAERS data, and data from Dr. Dalmacion should be enough reasons for governments, including the Philippines, to pause and re-think their mass vaccination program while infections are either rising or staying at high levels.

I am a COVID survivor myself. From the first day of symptoms to the “you’re already cured, you may stop your medicines except supplements Vit. C, D” pronouncement by my doctor-friends, it was 19 days. In my worst days — just walking 10 steps, bed to door and back, I was already desperate for air, with a cough with phlegm or a dry rapid-fire cough, etc. — I was taking up to four ivermectin tablets per day, plus various medicines and a hydrogen peroxide nebulizer, winding down to one tablet a day as I got better. After being cured, Doc Homer Lim, who is the new president of CDC PH and one of my doctors, said I could stop taking ivermectin as I have antibodies against the virus already, long-term protection against different variants.

CDC PH has turned one year old on Sept. 17. One year of tireless volunteer work to promote focused protection for the vulnerable, and early treatment for those with symptoms to avoid hospitalization. It will hold another big press conference on Sept. 30.
---------------