I am reposting these news reports, how the world, Europe especially, cannot really get out of fossil fuel dependence despite all the political pronouncements. Meanwhile, prices as of this writing. 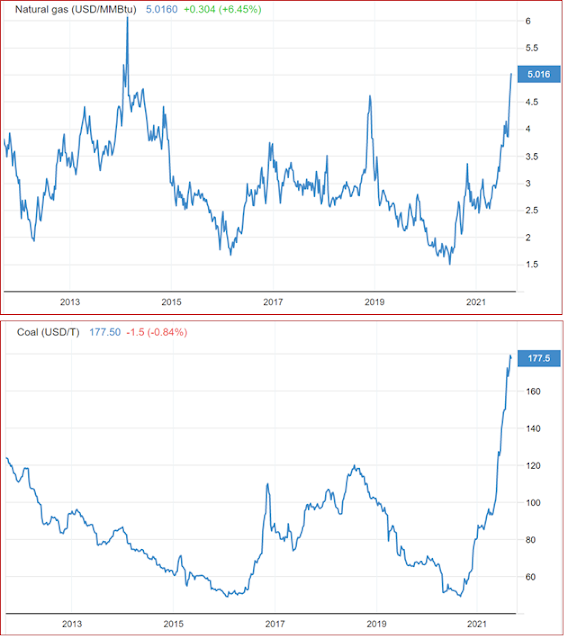 Europe is facing a natural-gas shortage just as Russia is completing a controversial pipeline to Germany, increasing President Vladimir Putin’s leverage over the continent’s energy flows...

Russia, Europe’s biggest gas supplier, has declined to book big additional flows through pipelines in Ukraine, which are running below full capacity.

The Energy Security Board (ESB) provides advice to the nation’s energy ministers and comprises the heads of Australia’s major energy governing bodies.

Advice to the ministers on the electricity market redesign, released on Thursday, includes a recommendation for a mechanism formally known as the Physical Retailer Reliability Obligation (PRRO).

The UK has turned to a coal-fired power station to help boost its energy supply after global gas and power prices hit new highs and wind farms produced very low levels of electricity.

National Grid ESO, which balances Britain’s electricity supply and demand, asked EDF to fire up two units at its West Burton A power station in Lincolnshire. They had previously been on standby.

And if Europe is still hoping that its own fossil fuels would prevent a winter price crunch for power, it would be wrong. According to Bloomberg, several production outages and declining gas fields have helped to send natural gas prices trading at a premium to crude oil.
Some estimates see retail consumers paying 20% more for utility bills.

When markets closed on Monday, metallurgical or coking coal was selling for $274 a tonne, very near the all-time high of $299.33 a tonne in November 2016.
The $274 cost was below its close last Friday which was the highest price for coal since April 2017.
In the past year, coal has been up 170 per cent.

CAISO wants the DoE to suspend air-pollution rules so it can use natural gas turbines as "back-up power generation and freeing up additional energy capacity to help alleviate electric demand on the electricity grid."

A toxic combination of low wind speeds and a severe squeeze on the supply of natural gas sent power costs jumping tenfold on the British mainland on Thursday to as much as £2,300 per megawatt-hour, a new record high.

Claim: Australia can Live the Renewable Energy Dream – All We Need is a Trillion Dollars of Government Loans
Eric Worrall  September 8, 2021
https://wattsupwiththat.com/2021/09/07/claim-australia-can-live-the-renewable-energy-dream-all-we-need-is-a-trillion-dollars-of-government-loans/

The biggest issue which jumps out at me, the expenditure Saul proposes is not a one off. If everyone continues to replace their appliances every 10 years, we’re talking about an additional $1 trillion or $100,000 per household which will have to be part financed by additional government soft loans every 10 years.

Natural gas prices are rising and could be the most expensive in 13 years this winter
Patti Domm   SEP 9 20213:59 PM EDT
https://www.cnbc.com/2021/09/09/natural-gas-prices-are-rising-and-could-be-the-most-expensive-in-13-years-this-winter.html

In the futures market, the natural gas contract for October rose above $5 per one million British thermal units, or mmBtus, for the first time since February, 2014. Besides electricity and heating demand, natural gas is an important feed stock and is used in the processing of chemicals, fertilizers, paper and glass, among other products.

Supply shortages have driven up coal prices in China and coal-fired power stations can only raise rates to accommodate increasing operational costs by as much as 10 per cent, with a large part of electricity prices fixed by the government.