I am reposting some comments during the "BWorld Insights on RE and Nuclear" yesterday, August 25, 2021. 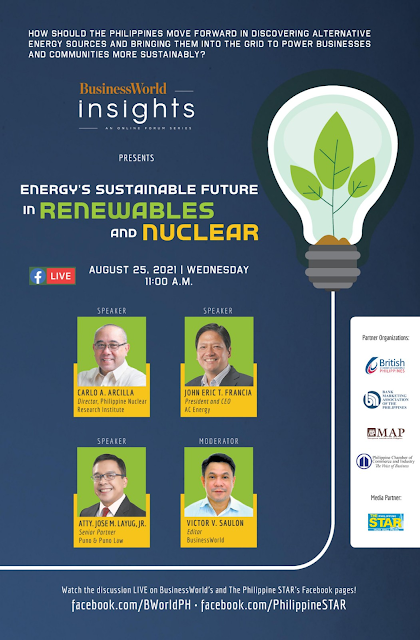 All solar wind proponents here are innocently or intentionally trojan horses for the decadal entrenchment of GAS in the PH.

Distributed nuclear gets rid of the need for massive grid transmission improvement.

Why did not invite me ?

So many factual errors stated here which I could have called out.

The unreliability caused by wind solar intermittency is favorable for the electricity market to be gamed !

It is a bargain for that price ! Thats just a little more than a greenfields coal or gas plant. Each GW of nuclear avoids 600M US$ every year of coal or gas importation.

Ian Kester Fancubit:  For Dr. Arcilla, I am a mechanical engineer graduate this year and I know that nuclear energy has a great potential. Utilizing this energy for a developing country will help us grow and further grow until 2050. My question to Dr. Arcilla is that which provinces is potentially in your watchlist can a new nuclear power plant be built because I visited BNPP last 2018 and it is now being used as a museum for future Filipino engineers how nuclear energy works and according to news articles, it would take almost billion dollars just to renovate BNPP and bring it to operation. Thank you sir for your conviction and I hope future engineers like me will consider and realize the nuclear energy position in boosting our Philiippine economy.

Mark Cojuangco: Chernobyl had no containment. Containment is premitigation for any nuclear incident including meltdowns! Coal and Gas pollution kills yens of thousands every year.

BusinessWorld: Mr. Layug: We're hoping that in five years' time, we can depend on offshore wind to provide additional capacity and add to our renewable energy targets.

Arnulfo Robles: There must be wrong somewhere even as RE is given preference: in energy policy, dispatch, subsidy, etc. but still utilization and capacity supply is on the downside as we move along. We cannot be blaming always fossil fuel sources (e.g. coal, oil, gas) for this dilemma as the country needs urgent energy supply stability moving forward.

We can keep BNPP in mothballs until attitudes change.

It was commissioned in 2016, and granted a 40 year operating license. It is entitled to 2x 20 year extensions for a total of 80 years.

BNPP is a much more modern plant that Wattsbar2.

BusinessWorld: Mr. Francia: The new emerging technologies [on renewable energy] should be looked at as an industry. We should not just focus on the traditional.

Mark Cojuangco:  All solar wind proponents here are innocently or intentionally trojan horses for the decadal entrenchment of GAS in the PH.

BusinessWorld: Mr. Layug: We're hoping that in five years' time, we can depend on offshore wind to provide additional capacity and add to our renewable energy targets.

Mark Cojuangco:  Exclude the < 50 mortality caused by Chernobyl, which had no containment, and nuclear’s alltime mortality is ZERO !

Ian Kester Fancubit:  For me sir, the shift to RE is not viable to us, though prices have dampened right now, the copper and nikl prices will continue to rise due to the electric vehicles boom this decade and it will eventually put off RE to more prices unless the shortages for copper will be addressed as demand grows year per year. Coal and gas plants is now being targeted and closed in most countries since NET ZERO carbon commissions must be achieved until 2030. I think our heavy reliance in these energy sources should be lessened because of its critical carbon commissions contributing to global warming which bars investors to invest in these plants, and most investors shifting right now to RE and hopefully Nuclear as Dr. Arcilla have mentioned that Korea is building new nuclear power plants at UAE and the possibility and risk-reward ratio is more beneficial for our country than RE.

Nonoy Oplas: Thanks Caloy. Tell frankly Eric Francia and Jay Layug that they are just advancing their business and corporate agenda. Coal remains the cheapest, most stable, dispatchable energy but it has been overpoliticized, demonized. Small modular nuclear for big islands like Palawan, Negros, Mindoro, Masbate, etc. will be the next best solution.
-------------

Below, various news reports on renewed interests for gas and coal power.

Since this is just an average, and that wind turbine power production could have actually been near zero during some portion of the month of July, it is possible at times that no number of wind turbines could replace the electricity generated by the coal power plant without sufficient battery back-up for at least part of the month. 3,764 wind turbines would also require 427 miles of mountain top, reaching all the way to Vermont. A battery backup system with a capacity for 10 days worth of July coal plant energy generation would cost nearly $90 million dollars.

Power plant longevity is also an important factor with regard to cost. The Mount Storm coal power plant began producing electricity 57 years ago in 1964. Some estimate wind power to have a 30-year life though the nearby Pinnacle wind project with its 23 turbines is having its blades and turbines replaced after only 10 years of operation and at a cost of $128 million dollars.

It is clear that wind power is not going to knock out coal power, at least not here at Mount Storm. Wind projects and other renewables are certainly landing punches as coal loses favor as a power source in this country.

HOUSTON, Aug 19 (Reuters) - The world's newest oil-producing nations grabbed the spotlight at this week's Offshore Technology Conference with ambitious plans to tap oil and gas discoveries in a race against a global energy transition to lower-carbon fuels.

At the conference highlighting renewable and cleaner-burning fuels and investors moving bets away from fossil fuels, Brazil, Ghana, Guyana, and Suriname laid out agendas to pump massive oil and gas discoveries that could reshape their economies - if they can get them to market before values erode.

The California Department of Water Resources is in the process of procuring five temporary gas-fuelled generators that have individual capacities of 30 megawatts, said spokesman Ryan Endean. The units will be installed at existing power plants and are expected to be operating by the middle of September.

(5) California: Curtailing Solar Power & Building Natural Gas Plants… Because…
Because “I don’t care who you are! That’s funny right there!” by David Middleton
25/08/2021
https://wattsupwiththat.com/2021/08/24/california-curtailing-solar-power-building-natural-gas-plants-because/ 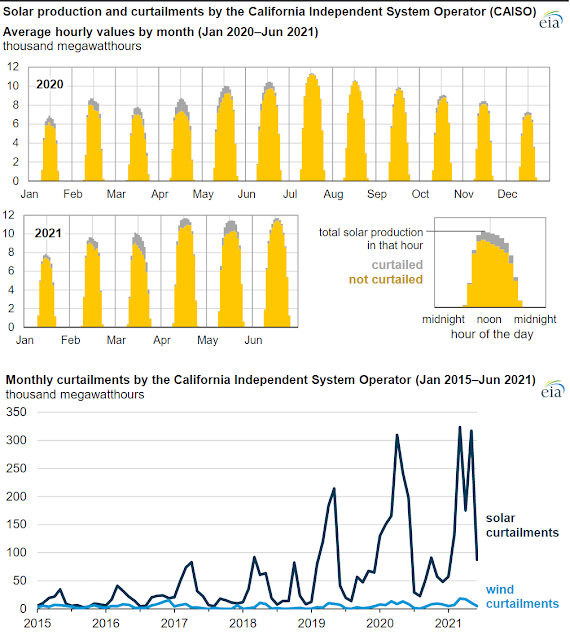 (6) China Is Planning to Build 43 New Coal-Fired Power Plants. Can It Still Keep Its Promises to Cut Emissions?

China is planning to build 43 new coal-fired power plants and 18 new blast furnaces — equivalent to adding about 1.5% to its current annual emissions — according to a new report. The new projects were announced in the first half of this year despite the world’s largest polluter pledging to bring its emissions to a peak before 2030, and to make the country carbon neutral by 2060.

(8) Coal Shows Its Staying Power as Economies Bounce Back
Surging electricity use and higher natural-gas prices are giving coal new life despite its environmental drawbacks
By Sarah McFarlane and Katherine Blunt   July 7, 2021 5:33 am ET
https://www.wsj.com/articles/coal-shows-its-staying-power-as-economies-bounce-back-11625650381

Appalachian thermal coal is averaging about $60 a ton, its highest point in two years.  Met coal, which is used in making steel, is averaging $180 a ton at the mine, a three year high.

“The pricing is very high right now,” said West Virginia Coal Association President Chris Hamilton.  “It is a tremendous boost for the industry.”

Australian thermal coal at Newcastle Port, the benchmark for the vast Asian market, has climbed 106% this year to more than $166 per metric ton, according to the latest weekly assessment by commodity price provider Argus.

The resurgence of thermal coal, which is burned to generate electricity, raises serious questions about the so-called “energy transition.”

The government is expected to give the go-ahead to the coal-burning Kingsnorth power plant. Here, one of the world's foremost climate experts launches an excoriating attack on Britain's long love affair with the most polluting fossil fuel of all.
---------------