A friend posted in one of my Viber groups a recent paper in Business Insider, “Nobel laureate Paul Krugman predicts a swift, sustained economic recovery once vaccines are out.”

I quickly laughed at "Krugman predicts." Here are some of Krugman past predictions:

"So we are very probably looking at a global recession, with no end in sight."

"Installing Donald Trump in the White House is an epic mistake. In the long run, its consequences may well be apocalyptic, if only because we have probably lost our last, best chance to rein in runaway climate change."

Was there a US recession, global recession as Krugman predicted, when Trump assumed Presidency from January 2017? Far out. We compare GDP growth of his beloved Obama-Biden 2nd term (2013-2016) and Trump period (2017-2019, and the nine other major economies in the world.

On #2, "runaway climate change", see this beautiful chart from Bjorn Lomborg, climate-related deaths and risks from 1920 to 2020 are declining, not rising. 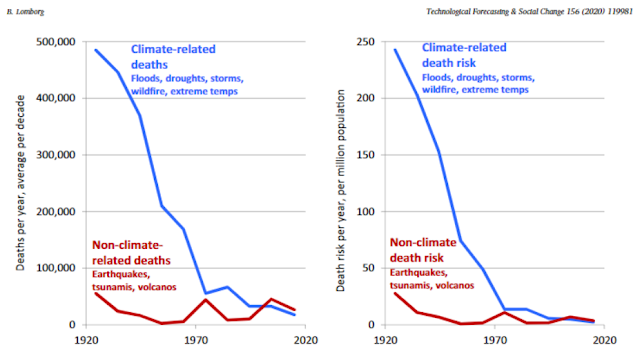 “Welfare in the 21st century: Increasing development, reducing inequality, the impact of climate change, and the cost of climate policies”
by Bjorn Lomborg, April 2020  (35 pages)
https://www.sciencedirect.com/science/article/pii/S0040162520304157

Also this paper, "A data-driven end to capitalism as we know it"
by Andy Mukherjee, Bloomberg Opinion, BusinessWorld Dec. 28, 2020.

Me wonders why more people seem to wish socialism and more state dictatorship, more econ central planning and income confiscation to force equality and income redistribution. These socmeds -- Viber, FB, IG, Twitter,... -- are driven by capitalism and profit motive. These are hurting people?  That's why they want to end capitalism or further restrict it and hand over more pol and econ power to sgovt that produces nothing really productive, just more regulations, taxation and endless subsidies?