BWorld 471, The US and world economy these past four years

On Jan. 20, outgoing US President Donald J. Trump will leave office and new US President Joe R. Biden will be inaugurated. We can review the US economic performance under Mr. Trump in the last four years and compare this with other countries, as well as US performance during the second four-year term of former President Barack H. Obama with Joe Biden as his Vice-President.

First among the indicators is growth of the gross domestic product (GDP). We use the average growth in Obama’s first term, 2009-2012, as the baseline, then his second term 2013-2016, and compare this with the first three years under Trump. We use the world’s top 12 largest economies in GDP size as they set the overall pace of global economic performance.

In terms of per capita GDP, only the US had a big expansion in 2017-2019 from the 2016 level, the last year of Obama’s presidency, with a $2,412 per year increase. Germany and France also had significant increases during that period, but they came from significant per capita income declines from 2008 to 2016. China and India had modest increases (see Table 1). 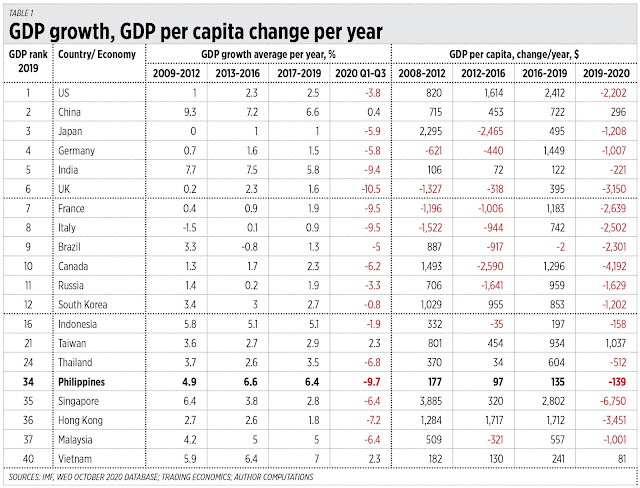 Next we check foreign direct investment (FDI) inward stock, which reflects net gains through the years in annual inflows less outflows. Again, the US gained a significant increase in 2017-2019 from the 2016 level, with a $960 billion/year increase. The UK’s Brexit plan (referendum victory in 2016) seems to have attracted more FDIs with $205 billion/year increase. China had a modest increase. Data comes from UNCTAD’s World Investment Report (WIR) database 2020.

In terms of merchandise trade, Trump challenged China in 2018 to lower its tariff for US exports, otherwise the US would raise its tariff for China exports. Many people lambasted this move as “Trump protectionism.” Until 2016, the most favored nation (MFN) mean tariff rates for manufactured goods were as follows: Japan, 2.5%; the USA 3.6%; EU, 4%; China, 9.4% (see https://www.bworldonline.com/austrian-thinkers-and-the-g7-zero-tariff-challenge/). So it is clear as China or Xi Jinping protectionism but people did not call it as such, only “Trump protectionism.” 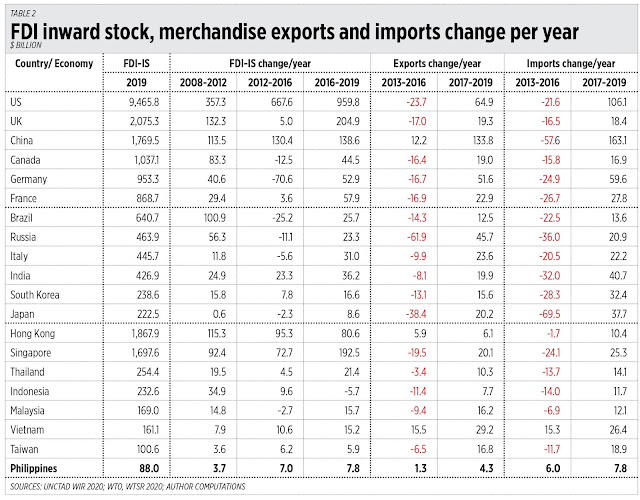 Overall on the economic front — GDP growth, GDP per capita, FDI inflows — Trump delivered on his promise to “Make America Great Again” (MAGA) with a good economic legacy. Gains in US merchandise trade are not reflected for now but China was adversely affected and many US companies have left China and moved to Vietnam, Malaysia, and other ASEAN countries.

The Philippines still has to see a significant increase in FDI inflows. Proposals to amend the Philippine Constitution and remove economic restrictions are good and must be pursued. We also need to cut corporate income taxes via the CREATE law, and significantly expand power supply capacity from cheap and reliable energy sources and dispel fear of future blackouts.
----------------