The new budget law or General Appropriations Act (GAA) 2021 was signed by President Rodrigo R. Duterte on Dec. 28, 2020. Due to space constraints, I will not include items and agencies with spending below P20 billion. For comparison I include spending and revenues in the last two years, and also those in 2016, the last budget of the previous Aquino administration.

Data comes from the Budget of Expenditures and Sources of Financing (BESF). Here are some revelations:

2. …Despite big decline in revenues. With the strict and indefinite lockdown, many businesses have gone bankrupt or suffered heavy losses, so tax and non-tax revenues declined significantly. My estimated revenue decline is -P290 billion in 2020, and P228 billion recovery in 2021.

5. Big increases in the budgets of the departments of Public Works and Highways (DPWH), Education (DepEd), Social Welfare and Development (DSWD), and Health (DoH). This is understandable as the government expanded spending for public infrastructure and welfare subsidies as it tries to compensate for economic contraction because of its strict and prolonged lockdown, now 10 months long. Those with budget expansions of about P20 billion from 2019 to 2021 are the Department of Agriculture (DA), Department of Labor and Employment (DoLE), Commission on Higher Education (CHED), and state universities and colleges (SUCs).

6. Big declines in the budgets of the Departments of the Interior and Local Government (DILG) and National Defense (DND). In particular the Armed Forces of the Philippines General Headquarters (AFP-GHQ) budget fell significantly while the Army, Air Force, and Navy resumed their budget increases from 2019 to 2021. The Philippine National Police (PNP) suffered a P38-billion budget decline over the same period.

7. Big items in pension and personnel benefits. There seem to be new items in the 2020 and 2021 budgets that were not present in 2019 and earlier years. While many workers and entrepreneurs in the private sector suffered job and income losses, government personnel and officials enjoy expansion in benefits.

8. Huge COVID-19 vaccine procurement. A huge new spending item of P70 billion was introduced in 2021 for the procurement, storage, and distribution of COVID-19 vaccines. This is among the “Unprogrammed Appropriations” as they were not part of the budget submitted by the Department of Budget and Management (DBM) to Congress in July 2020. 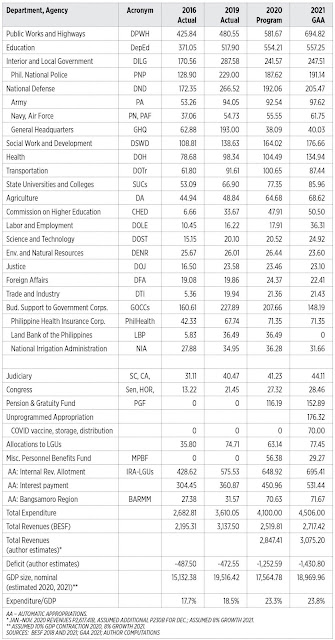 10. Continuing fiscal irresponsibility. Average households and private enterprises have savings and surpluses during their non-crisis years and use such savings or resort to borrowings only in crises like family health emergencies. Not like in government, where every year is a “crisis year” and hence, an over-spending and borrowing year.

The huge vaccine procurement is consistent with the continuing huge COVID-19 hysteria and indefinite lockdown here. The Philippines’ 85 COVID-19 deaths per million population (CDPMP) as of Jan. 11, 2021 is small compared to 1,000+ for the US, the UK, Belgium, France, Italy, Spain, Mexico, Peru, Panama, others. Minus the hysteria, such a huge vaccine procurement is not justified.

The Concerned Doctors and Citizens of the Philippines (CDC PH) has taken a soft support of the government’s vaccine program but it believes there is a more immediate and much cheaper solution to prevent hospitalizations and deaths by the use of preventive prophylaxis and early treatment protocols even for high risk people (the elderly, those with comorbidities).

Government should learn to cut spending and live below its means both in crisis and non-crisis years. It has plenty of assets that it can privatize to raise revenues and not resort to over-borrowings and, later, over-taxing the citizens. Also, it can leave plenty of public infrastructure to private investors via PPP and not compromise taxpayers money, today and tomorrow.
---------------

Posted by Bienvenido Oplas Jr at 11:33 AM