When I went to Houston, Texas in 2017 to attend a conference, some of my Filipino friends there hosted me few days after the event and toured me around the city. They told me that until Obama, some parts of the city have many illegal migrants with plackards like "hire me" for 1 day, 1 week jobs. Trump came and the illegals are gone, or in hiding and not explicit of their presence, Houston became cleaner.

My other Filipino friend in Virginia countered that
"Illegal immigrants do not make a place ‘dirtier’ just because of their presence…. People happily hire undocumented workers to do their home repair projects, tend their lawns/backyards, and clean their houses. They know it isn’t legal to hire undocumented workers but they love it and do it anyway because it saves them 30-40% over hiring workers from the formal sector. They know that the workers are undocumented bec they find them thru word of mouth or at known pick-up points in what you or your Houston friends might refer to as the “less clean” parts of town but they’re ok with it bec they just pick them up there where they assemble, drive them to their residences for day work, then drive them back. In short, they like it bec they are cheap and they’re not in their neighborhoods. They clearly benefit from the cheap labor (one guy I know probably saved $15K on a $40K home reno project) and their neighborhoods can remain “clean”. And best of all they virtually never get caught or penalized for doing this.”

Good observation and I thanked him for that. The key here is rule of law, that implementation of law on immigration do not make double standards. If you have strict immigration laws like what the US does to PH and other aspiring Asian migrants, do it as well to S. American aspiring migrants. Otherwise, relax the immigration laws that will apply to all aspiring migrants worldwide. Trump tried that by expanding the border wall with Mexico.

My position on migration is -- abolish the visa system, anyone can come in to any country but no welfare system for those migrants. If they cannot find jobs and no friends to take care of them, they go hungry and starve, go back to where they come from or die. The main function of government is to enforce the rule of law -- law on private property, law on protection of lives and liberty. Locals who are lazy can starve too while migrants who are super efficient and ambitious will prosper. 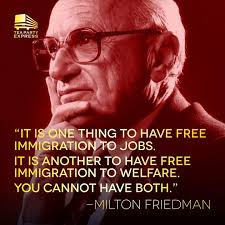 If countries should be consistent, either they have free migration and abolish the visa system, abolish border walls or fence. Let people from anywhere come in, but no state welfare system to feed them if they go hungry. The state comes in only to protect the laws on private property, protect lives and liberty. Even the poorest perslons on Earth cannot and shd not steal, they go to jail. Otherwise if there are double standards on poor people they cannot be jailed bec they steal for food and clothing, then many people will stop working, declare themselves as poor and keep stealing bec they won't be penalized.

Rule of law. The law applies equally to unequal people. If strict laws on migration, build a high and strong wall or fence, expand it. If not strict on migration, abolish border wall, abolish visa system. Only one law that applies to all migrants.