Migration 26, More countries should be created

As the world population increases, the number of countries should also expand. As people modernize and globalize, differentiation and specialization expand. But governments of each country always want to uniformize and standardize people and their behavior.

Small population countries and economies like Hong Kong, Singapore, Brunei, Luxembourg, New Zealand, etc. become more dynamic, more flexible for their citizens. Losing their people via migration is getting easier, so they need to remain competitive and attractive to keep their people, attract other migrants to replace their citizens who have left for other countries.

Candidate countries that are too huge, too bureaucratic to force uniformity and standardization of their people and therefore, need to disintegrate into many smaller countries are China, India, Russia, USA, Canada, Brazil, Mexico, Indonesia, Pakistan, Philippines.
The case of large-scale refugees and migration problem from a number of countries (Syria, Iraq, Bangladesh, Myanmar, etc.) is another compelling reason why more, new countries should be created, or be allowed to exist. 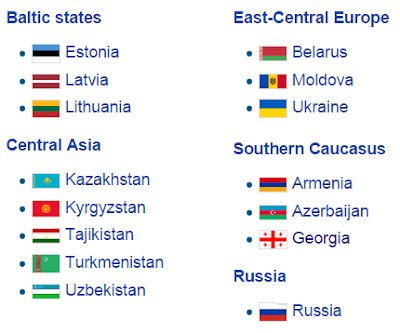 Disintegration of huge, bureaucratic, countries into many, smaller countries is the only way to allow and respect specific ethnic and cultural differentiation.

China in particular should disintegrate and allow the formation of new countries like Hong Kong, Macau, Tibet, Uigur region, etc.

USA too, allow states and territories like Alaska, Hawaii, Saipan, Guam, to become separate countries. Other states in the union may consider declaring their own country too.

On the other hand, here are the reconsolidated and merged countries into one:

Other New Countries
This post is shared by a friend Edison, the source/link was not provided:

As humanity modernizes and globalizes, they develop new traits and characteristics, differentiation among people expands, and people want their differentiation and new identities to be respected. Huge countries generally disrespect those differentiation, there are thousands of laws and regulations that force standardization, nationalization and uniformity.
Differentiation means people having different social and econ outlook in life. Like the Kazakhs and Uzbeks who did not want to be part of Moscow bureaucratism anymore. Or Singaporeans who did not want to be part of Kuala Lumpur administration anymore. I read that Sabah, Penang and other states in Malaysia also want to follow Singapore in a future secession move.

If Singapore did not secede from Malaysia, its corporate and personal income taxes would be around 25-30%, not 17%. Things like more leeway re what kind of taxes, tax rates, what kind of public spending, system of reward and punishment in public finance, and so on.

On the Koreas, I think N. Korea will collapse soon, aided indirectly or unintentionally by Chinese smugglers who bring in new mobile phones, laptops, other gadgets. N. and S. Korea will be reunited and consolidated, like Germany. But secession aspirations will come from Jeju and other island-states of Korea. I've been to Jeju island, small in the map but huge when you're there. It has almost everything -- beaches and fishing, lowland agri and highlands, mountains and volcanoes. Plus the physical infra like international airport, road network, huge hotels, commercial and industrial zones, etc.

Normally, governments of the mother country would fight tooth and nail, kill as many as possible, to prevent secession. It happened in East Timor. Legislators and Cabinet officials, say DA or DPWH or DepEd officials and bureaucrats for instance, are happy that their powers extend from Aparri to Jolo, or DOF/BIR officials are happy that they can collect various taxes from Aparri to Jolo. It is precisely those central planners and legislators from Manila and other capital cities that disallow flexibilities of the other islands, especially island-provinces and regions.

Here are some small countries (left) and Philippine islands (middle and right), land area in sq.kms. Any of these island-provinces and regions are potential new countries in  the future.

Smaller countries' governments would tend to be less populist and welfarist, and would focus on the main function of government -- to enforce the rule of law, protect private property and citizens' right to life against bullies and aggressors, right to self expression.
-----------