Today is exactly the 10th year that I have started blogging. I created this blog on October 14, 2005, and this was my first post.

Government -- to govern, to referee.
Also, to collect fees, to regulate, to intervene.
Yeah, we can attach various definitions and connotations about government.

But there are 3 things which are 100% present in all governments: politicians, bureaucrats, and taxes. Politicians are elected; bureaucrats are appointed and hired; and taxes feed them both.

So the bigger the government, ie, the plentier the politicians and bureaucrats, the bigger and plentier the taxes and fees to support them, and their offices, and their travels, and so on.
A number of government services are indeed necessary, like the policemen who caught the guys who mugged you, or stole your bike or car, or raped your sister or daughter. And the judges who sentenced the bad guys to either the prison cell or the electric chair.

But many government services are unnecessary and hence, the taxes and fees taken from the people's pockets are unjustified. Or, another way of saying this is, better leave those services to the private individuals and enterprises, to voluntary organizations and charities. These guys will get their revenues and income in the form of sales of their wares and services, and in contribution from other guys.

What happens when government becomes big?
Oh well, if you're an employee or a manager, government will first make your pay a bit smaller compared to its potential because of taxes levied on the company (for instance, corporate income tax). Then, government will take a portion of your personal income. Then from your take-home pay, your consumption goods and services will become more expensive because of add-on taxes incorporated there, like import tax, sales tax or value added tax, excise tax on your beer and cigarette.

Oh, and don't forget. Government can also tell you you can't buy sugar or cigar from a country that your government finds distasteful. Or you can't sell your wares much to a country because of the high import tariffs and taxes that the government of your consuming country has imposed.

Well, it's not fun talking about burdens and restrictions. But we can make fun of the politicians and bureaucrats who made our lives a bit difficult. For instance, a politician told a group of people attending a political rally. "These are my principles! But if you don't like them, I have others."
Hehehe.
----------

So after 10 years, there are now almost 2,100 blog articles here, short and long. And I have enjoyed writing, I enjoyed the freedom to express my ideas and observations, the responsibility to own up and be accountable to my opinions and statements, the privilege of being read, quoted, questioned, articles shared by my readers.

The peak was in March 2011, 47,684 pageviews. That was during the Libyan conflict where the late leader Muamar Khaddafy/Gadhaffi was toppled. 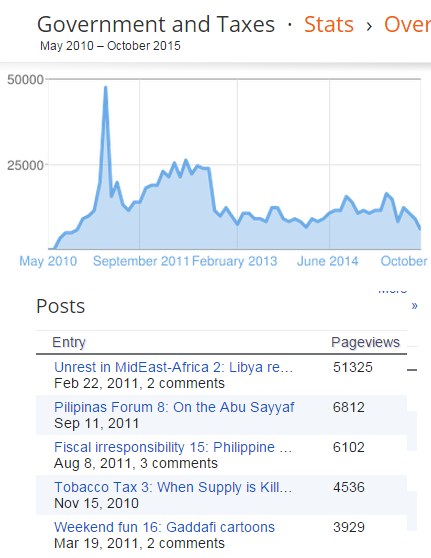 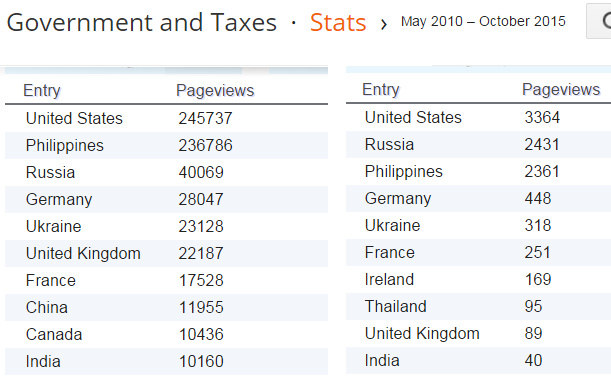 Thank you readers. I will keep writing as long as I can, and I hope you will visit this site regularly. Thank you.

Nonoy Oplas
Posted by Bienvenido Oplas Jr at 9:42 AM

Are you familiar with the noise this article about the Santiago-Marcos tandem has been generating in social media since yesterday:

The reason I ask is because the more I see people endlessly debating about personalities and politicians (e.g. Marcos vs. modern times), the more your arguments for free markets and "minimalist but not zero" government look interesting.

It's sickening and frustrating to see that after 5 presidents following Marcos, there appears to be minimal improvement in the Philippines regarding things like corruption eradication, infrastructure development, poverty-alleviation and "inclusive growth" particularly for members of the agriculture sector, etc.

Maybe development is really not just about personalities and governments per se. Maybe it's more of who can strengthen markets the most and who can make government perform its MOST ESSENTIAL functions.

Some people like to make governments' job appear more complicated than what it really is.

Thanks Dino. One reason why I seldom comment on PH electoral exercise is because it is heavily polluted by personality politics, which tend to cancel each out after sometime. People often discuss issues at the surface, whether in energy and electricity, property rights and protection, trade in goods and services, agriculture and biotech, and so on. So I persist on discussing those issues to fill some void in national discourse -- from the perspective of market competition and brand regulation, not more bureaucratic regulations and taxation. Cheers.