From Kyotoism to Paris climatism

Kyotoism, the philosophy that the Kyoto Protocol (KP) of binding carbon emission reduction by many rich and industrialized countries will help "save the planet", is dying. KP was adopted in 1997 in Kyoto, Japan, and became binding by 2005. It will expire by the end of 2012. Thus, the rush by the UN and many governments to have a new binding agreement that will supplant KP by 2013.

The point organization to prolong climate alarmism -- more environmental regulations, more carbon and energy taxation, more climate bureaucracies and frequent global climate meetings/junkets, more climate loans -- is the UN Framework Convention on Climate Change (UN FCCC). Thus, there have been huge global climate meetings called the Conference of Parties (COP) in the past, particularly the COP 15 in Copenhagen, Denmark in December 2009, then the COP 16 in Cancun, Mexico in December 2010. The next COP meeting will be in Durban, South Africa, this coming December 2011. 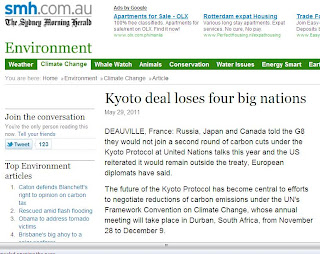 Here's the latest update: four countries, the US government (original non-signatory to KP) will be joined by the governments of Japan, Russia and Canada that will not sign any KP part 2. The reason is that "the Kyoto format did not require developing countries, including China, the world's No. 1 carbon emitter, to make targeted emission cuts."

So you have the world's biggest carbon emitters -- China and the US, plus Japan, Russia, Canada -- not signing another round of "Earth-saving" deep emission reductions. The UN officials and bureaucrats particularly involved in climate alarmism -- IPCC, FCCC, UNEP, WMO -- would be panicking by now. If many rich country governments are not convinced of the "urgent necessity" to save the planet, and these same countries have serious fiscal problems like huge public debt, the next move could be the reduction of UN funding, and that might affect all their globe-trotting lifestyle to scare the world. 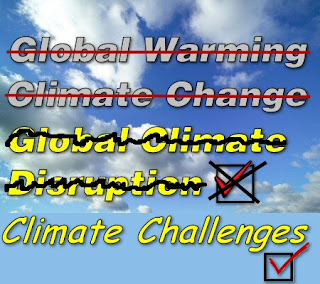 Meanwhile, this UN Press Release in 2008 was cool, or hotly kidding. It quoted the head of the UN General Assembly that they projected 50 to 200 climate emigrants or refugees by 2010. Where are those millions of climate migrants/refugees last year? 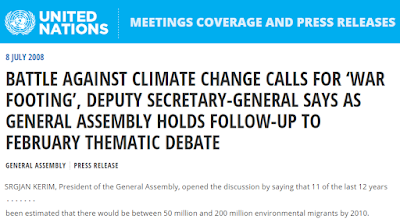 Update:
Next month, thousands of climate officials, negotiators and planet saviours will burn tons of petroleum flying from anywhere in the planet to Paris, France, for the UN FCCC meeting, November 30 - December 11. They will mainly talk about climate money, who should give how many billions of dollars to whom, to "save the planet." 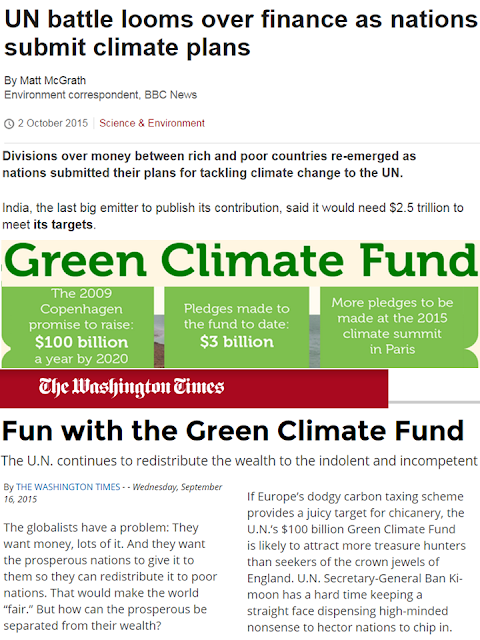 The climate alarmism movement  has successfully dug its own hole and graveyard of disappointment, angst and anger. As the movement paints more scary scenarios, they further raise the cost of preventing that scary and fictional scenario. Now the  cost of climate extortion keeps rising.
----------