The Arctic ice and those in Greenland is being watched by many climate alarmists as "catastrophically melting", which will result in rising sea level, flooding of low-lying areas and islands around the world. And more drought and more rains and flood; more snow and less snow; more hurricanes and less hurricanes; more typhoons and less typhoons in the tropics, and so on.

Here is a picture of 3 of the 97 ships stuck in deep ice in Russia last week. The news report was dated yesterday, 16 March 2011. The crew of the stranded huge ships can perhaps play soccer on the sea to keep themselves warm in this period of "ever-warming" planet.

The news report said "at least 97 ships were still waiting for help on Tuesday, down from 160 ships two days ago." Amen to claims of "ever-melting polar ice". Source of picture is The Moscow Times and posted in Steven Goddar's blog today.

Click on the picture (and next 2 pictures below) to see their larger images. 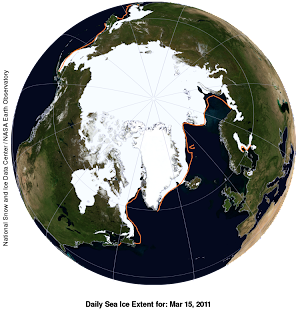 Here is the latest satellite picture of Arctic ice, as of two days ago, 15 March 2011. Data is from NSIDC.

Perhaps thousands of polar bears are drowning there right now because of the lack of ice. And what do the bears eat, salmon and other fishes? Then the population of salmon should be expanding at geometric rate as their main predator are slowly being wiped out from the face of the Earth.

And here is the sea ice extent data as of 15 March 2011, also two days ago. It's around 13.5 million sq.kms. of ice up there. It should peak by next week, before the ice will start melting slowly, for its annual cycle of ice growing-melting-growing-melting. Data is from IARC-JAXA (International Arctic Research Center - Japan Aerospace Administration). This and other graphs of the Arctic and Antarctica ice are found in WUWT Sea Ice Reference Page. 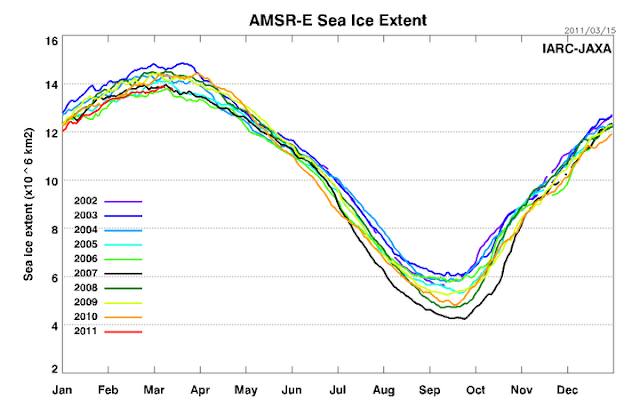 What's that polar ice cycle again? Didn't we hear from Greenpeace, WWF, Oxfam, IPCC, UNEP and other groups that polar ice are in dangerous, if not irreversible, melting due to man-made warming?
--------- 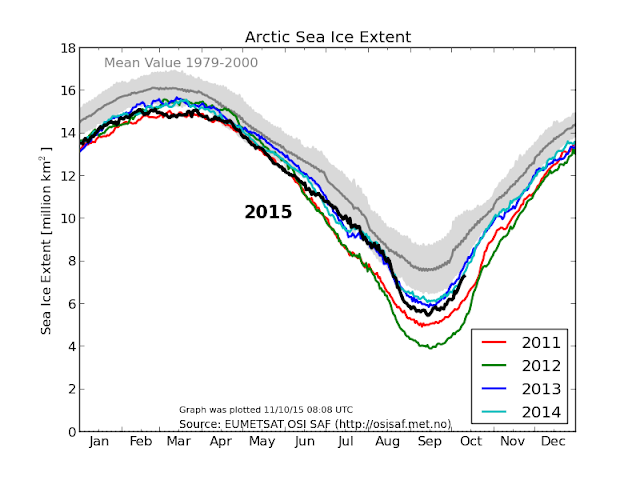 And from Arctic Data Archive System (ADS), https://ads.nipr.ac.jp/vishop/vishop-extent.html?N.
Arctic ice is lowest usually during mid-September and highest during March, each year. As of yesterday, it's at almost 6 million sq.kms. wide. 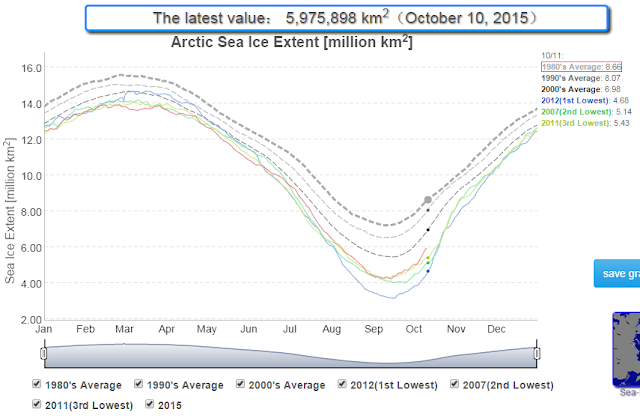