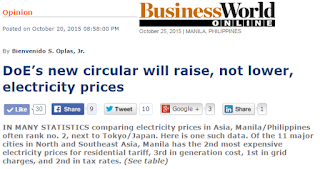 IN MANY STATISTICS comparing electricity prices in Asia, Manila/Philippines often rank no. 2, next to Tokyo/Japan. Here is one such data. Of the 11 major cities in North and Southeast Asia, Manila has the 2nd most expensive electricity prices for residential tariff, 3rd in generation cost, 1st in grid charges, and 2nd in tax rates. (See table)

With such a cost structure, it would be a mystery why some groups and government officials would think of new ways and schemes that would further raise electricity prices in the Philippines. 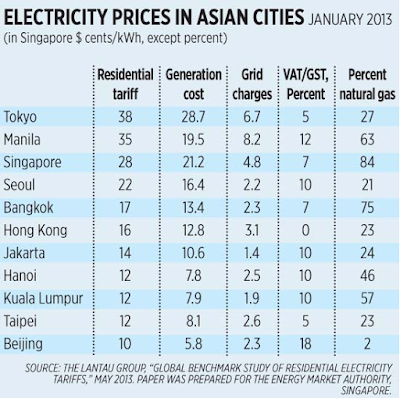 Like the feed-in tariff in the Republic Act (RA) No. 9513 or the Renewable Energy Act of 2008 and more recently, the Department of Energy (DoE) Circular No. DC2015-06-008, “Mandating all Distribution Utilities (DUs) to undergo Competitive Selection Process (CSP) in securing Power Supply Agreements (PSA)” through a Third Party.

There are two normal and two abnormal concepts in this Circular. The normal ones are CSP and PSA, they have been there since many decades ago, DUs and electric cooperatives doing CSP on their own with power generating companies (gencos) in getting their PSAs.

The abnormal ones are the (a) mandatory, obligatory CSP, and (b) introduction of a Third Party. The latter is a private entity or organization that suddenly has the power to say “Yes” or “No” to a PSA entered between a DU and a genco. Let us call them “Abnormality A” and “Abnormality B,” respectively.

Abnormality A is suspicious because it imposes a new degree of coercion and arm-twisting for the DUs.

In areas or cases where power supply (by gencos) is lower than the demand (by DUs), there is little or no leeway to do CSP. The key to have cheaper electricity is to have lots of gencos competing with each other in supplying electricity to DUs and other institutional consumers via lower prices.

Abnormality B is even more suspicious because of three reasons. One, this Third Party is not free, it will impose new cost to the monthly electricity bill of the consumers with a monthly fee to be paid to those “foreign and national experts.”

Two, the Energy Regulatory Commission (ERC), a government agency created by Congress under the RA 9136 or the Electric Power Industry Reform Act (EPIRA) as the real and institutional Third Party between gencos and DUs, is now relegated as a mere Fourth Party because there is a new Third Party -- with zero congressional legal basis or justification -- that was inserted in the process. The draft implementing rules and regulations made by the DoE gives lots of powers and leeway for this Third Party.

During the DoE public consultation about the Circular last Oct. 6 at Intercon Hotel in Makati, it was obvious that some NGOs and “consumer groups” were lobbying hard and positioning themselves to be the accredited Third Party. Not only for the potential big money involved from the fees to be collected, but also for that new bureaucratic power to approve or disapprove a PSA between legitimate DUs and gencos.

And three, Abnormality B imposes mandatory aggregation of DUs for their PSAs. Each DU has its own cost structure, own requirements, own set of consumers (residential, commercial and industrial) that often are different from those of other DUs. Imposing a one-size-fits-all order removes the flexibility of DUs to get their own PSAs.

This circular is very successful in creating more questions than it could answer. It introduces new cost that will raise electricity prices, thus cancelling or negating its stated goal of lowering electricity prices.

The DoE seems to be in a hurry to have this circular become operational within the next few weeks. In the event that it is ultimately to be implemented, there are at least two remedial measures for the DUs, gencos and the public.

One, there should be independent audits of that Third Party to evaluate compliance with rules and regulations set by the ERC and EPIRA.

And two, the IRR should have a sunset provision or clause, ordering the DoE and ERC to conduct a study or commission a study on the Cost-Benefit analysis after one year of implementation, to see if the circular has indeed brought down the cost of electricity in the country or even contributed to higher electricity prices. If the benefits are smaller than the costs, the circular should become void and withdrawn, or be significantly amended to remove Abnormalities A and B.

Bienvenido S. Oplas, Jr. is the President of Minimal Government Thinkers, Inc., a free market think tank in Manila, and a Fellow of the South East Asia Network for Development (SEANET), a regional center based in Kuala Lumpur advocating free trade and free mobility of people in the region.