There is one interesting chart from The Economist daily chart, April 6th 2011. There is a disconnect, however, between the title, "Market troubles" and the chart, below.

So it does not appear to be "market troubles" but rather "market belief".

Now here is the original chart from the Globescan, also dated April 6, 2011. It was drawn from 12,884 interviews across 25 countries, people were asked, "The free market system and free market economy is the best system on which to base the future of the world." People choose whether "Strongly Agree", "Somewhat Agree", "Somewhat Disagree", and "Strongly Disagree". Click on the chart to get a larger image.

Update:
In a Spring 2015 Global Attitudes Survey by Pew Research Center, released last July 22, 2015, among the results is this chart. Optimism for the kids' future is highest in socialist and/or big population countries like Vietnam, China, Nigeria and India. The trajectory of many emerging and developing countries is generally towards more market-oriented reforms while those in developed countries is generally towards more bureaucratism,  more government regulations. This sends signals to the parents and current workers. 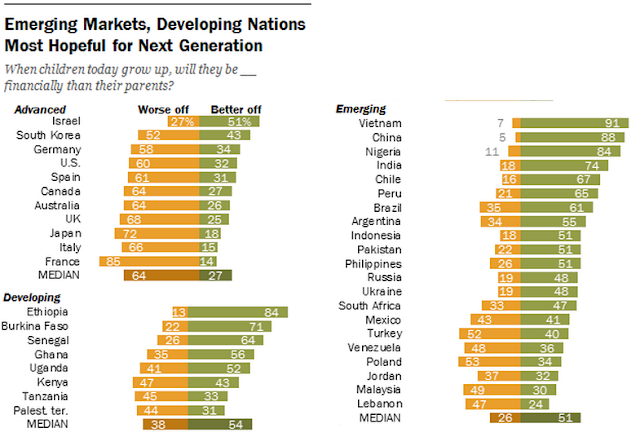 Of course there is no such thing as truly free market economy as even Hong Kong suffers from rising state regulations imposed from Beijing. But monopolies and oligopolies are becoming less and less tenable as the consumers become more informed, more articulate and more demanding for more options, more consumer freedom. And only market-oriented reforms can satisfy this rising consumer activism as more players, more producers can adjust more quickly to changing and rising consumer demand, both in prices and product/service quality.
--------