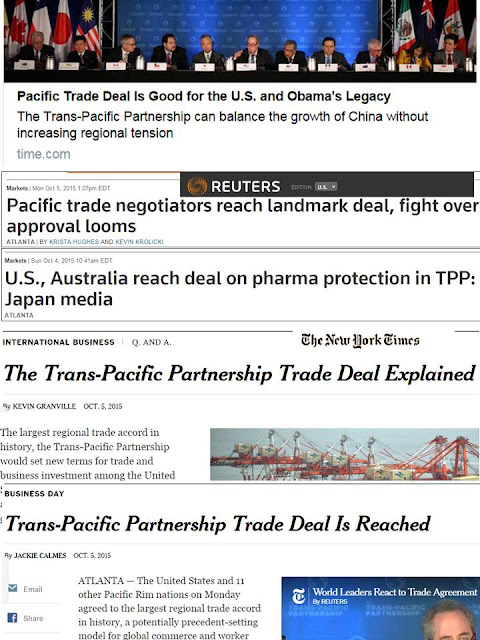 The Philippines is not in the original 12 TPP countries but will soon in the second wave of signatories. I support the PH to become a TPP member too. There are risks and "losses" but there are greater opportunities and benefits. Overall, there will be "net gain" (positives outweigh the negatives) from freer trade, there is net gain in joining the TPP. This graphics from the NYT. 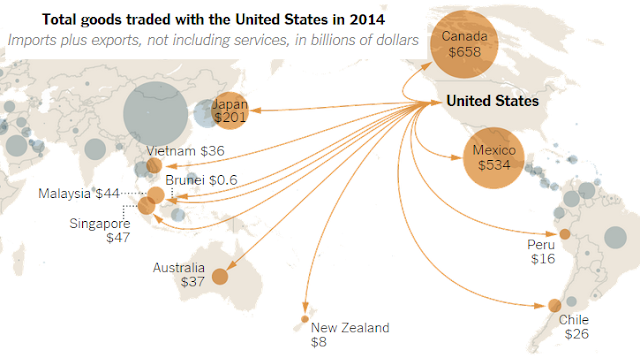 Compared to the ASEAN Free Trade Area (AFTA) or the Regional Comprehensive Economic Partnership  (RCEP, ASEAN 10 + 6 regular partners China, Japan, S. Korea, India, Australia and NZ) or APEC, the TPP is considered a "gold standard" in regional and multilateral trade agreements because of certain provisions that reaffirm private property rights, like IPR. At the WTO and UN, there are certain agreements that attempt to negate those private property protection, like an elaborate system of TRIPS flexibilities.

The usual fear and objection to TPP is that "big pharma to squash generics, or equivalent knock-offs of high priced drugs." So TPP "works to protect big pharma at the expense of patients in the developing world."

It is a big misconception that patent for newly-invented drugs apply even to old, off-patent, generic drugs. No. For instance, amlodipine molecule (against hypertension) is already off-patent. Any generic manufacturer, thousands of them worldwide, can make their own brand of amlodipine and sell at the lowest price they can afford or endure due to heavy competition. In the PH for instance, I think there are about 200 different brands of amlodipine generics alone. Any TPP or similar agreement will not affect these generics.

If another company produces another molecule against hypertension with a different property, say effective for patients with hypertension + diabetes + asthma and so on, the patent applies only to that newly-invented, patented molecule.
People refer to compulsory licensing (CL), a provision in the TRIPS flexibilities in the WTO which signatory countries respect, in advocating for certain types of patent confiscation. Opposition to TPP is generally misplaced and driven by emotions.

"Why is big pharma such a big supporter of TPP?" some ask. Well, big innovator pharma and big generics pharma support the TPP. Generic manufacturers in Vietnam and Malaysia can soon export their products big time to the US, Canada, markets that are otherwise protected due to high health, sanitary, technical barriers.

A friend, Bruce Hall, made this useful observation:

Corporations in general want consistency so that they can plan and invest. If one does not know what is happening from one year to the next when it comes to patent law or importation rules or what-have-you then one cannot know if one will get the investment back. TPP provides a single set of rules across a large portion of the planet that is not subject to the whims of politics. It is likely that big pharma supports TPP so that same reason that other exporters support it -- more markets.

TPP has actually led to the US agreeing to patent rules more in line with other countries' rules. See http://www.reuters.com/.../us-trade-tpp-australia...

TPP will not be the end of patent fights. Ultimately the fate of patents will lie within American politics. While outside pressure will help around the edges (see the linked article), patent law in the US will only be changed when US politics changes (which it constantly is). Unfortunately, too many domestic US pressure groups are using TPP to push their own agenda. We should not be swayed by such efforts. TPP is about building an international system based upon the rule of law and free trade that is flexible enough to address whatever changes will occur within global economics

Besides, many people who attack "big pharma" (referring to  the big multinational pharma) do not realize that in  many economies, they unknowingly attack big generic pharma. In the PH for instance, the big, huge, monster pharma here is not a multinational and innovator, but a local, generic pharma, United Laboratories (Unilab). It's annual gross sales is 1/4 of the total PH pharma market, and bigger than the combined sales of #s 2, 3 and 4 (Pfizer, GSK, another multinational).

For free marketers, the best trade arrangement is unilateral trade liberalization, least involvement and restrictions by governments in voluntary trade and exchange among people and private enterprises. Since this is far out from happening, a regional and multilateral FTA is the second-best solution.
------------

Posted by Bienvenido Oplas Jr at 2:47 AM