Of the 10 member-states of the ASEAN, Singapore is the most dynamic and most attractive in terms of trade, investments, finance, tourism and property rights protection, including intellectual property (IP). Which shows that the  main purpose  of having government is to help the people expand, not limit, their individual freedom, including the freedom to own and control private property, physical or non-physical or intellectual.

Below are three news reports that affirm this. Singapore is now ASEAN's patent search and examination authority. This is something that other member-states of the ASEAN should  consider and emulate -- when private property is secured and protected, more trade and investments, more finance and tourism, will come from many countries abroad.

So it is not about how populist and welfarist a government is that gives attractive and stable socio-economic environment; rather, it is the observance and enforcement of the rule of law, including the protection of IP rights (IPR).
---------- 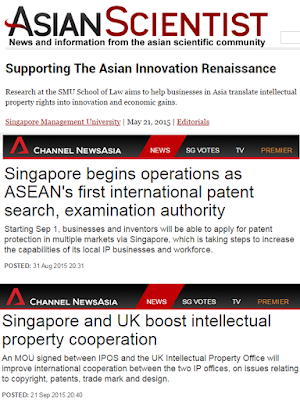 In total, innovators filed 2.57 million patent applications in 2013, a 9% increase from 2012. But while patent filings increased by over 26% in China, 12% in Australia and 8.3% in Korea, European filings were in decline, according to the 2014 World Intellectual Property Indicators report that gathers data on IP rights from more than 100 countries.

To help businesses in Asia convert IP rights into assets, the SMU School of Law will soon launch the Applied Research Centre for Intellectual Assets and the Law in Asia, in May 2015. “The Centre will focus on the interaction between IP law and business to facilitate appreciation of Asian intellectual assets and understanding of IP law in Asian economies, and the push for IP law cooperation in ASEAN,” explains the Centre’s director, Professor Liu Kung Chung.

Local and global businesses and inventors will from Sep 1 be able to fast track their applications for patent protection in multiple markets via Singapore. This comes as the Republic kicks off operations as ASEAN’s first International Patent Search and Examination Authority under the Patent Cooperation Treaty (PCT).

In a press release on Monday, the Intellectual Property Office of Singapore (IPOS) said that Singapore is the fifth in Asia - after China, India, Japan and Korea - to join a group of 19 IP offices worldwide that have been appointed as International Authorities for the PCT.

IPOS also said that patent applicants from Brunei, Japan, Mexico, Laos and Vietnam will be the first to gain access to Singapore’s new service offerings as an International Searching Authority and International Preliminary Examining Authority in the coming months. These arrangements were set out under bilateral agreements signed recently at IP Week @SG 2015, said IPOS.

According to the authority, Singapore is a “choice PCT application destination” because of its quick office turnaround time of around 60 days for most cases, as compared to two to three years of waiting time for similar responses from other IP offices. Patent applicants could also enjoy rebates of up to 75 per cent when applying through IPOS.
(3) Channel News Asia, Singapore and UK boost intellectual property cooperation, September 21, 2015.

The Memorandum of Understanding (MOU), which was signed on Monday, will improve international cooperation between the two IP offices, on issues relating to copyright, patents, trade mark and design, said the release.

"Singapore is an influential voice on issues of intellectual property in the ASEAN region," said UK Minister for Intellectual Property, Baroness Neville Rolfe, adding that the MOU will allow the UK and Singapore to share best practices in areas such as IP rights protection, IP-related research and the streamlining of IP court processes.

Mr Tan Yih San, chief executive of IPOS, said: "This MOU reaffirms our mutual commitment to increase cross-border IP cooperation and provide a robust IP system for businesses and creators looking to expand into the UK, and those seeking to venture into the ASEAN region.”