Pol. Ideology 76, A Nation Of Free Men Or Free Things

…There is a big difference between a free country and a country of free things. You can have one or the other, but you can’t have both. A free country isn’t obsessed with free riders, only a country of free things obsesses with making everyone pay their fair share for the benefit of the people who want the free things. The rugged individualism of Colonial America has given way to stifling crowds, co-dependent on each other, lined shoulder to shoulder, clutching at each other’s wallets, crying, “Take from him and give to me.

… The Fourth of July is Independence Day, but every other day is Co-Dependence Day, the days we celebrate our integration, our volunteerism and our compliance with a vast system which makes everyone dependent on the government and which makes the government dependent on everyone who still works for someone other than the government—including the freest of free riders, who work for themselves. Empires function by draining every drop from their possessions to cover their costs. The British Crown tried to drain America to pay down its debt, resulting in growing protests from the population and eventually a revolution. Now the Empire of Co-Dependency is draining its independent subjects for the benefit of its dependent subjects and the dependency infrastructure that employs its numberless bureaucrats who govern it all.

… A nation where everyone is part of one great co-dependent community, a centrally planned marketplace that can only be balanced if everyone is forced to buy what they are told to buy, is not a free nation. It will not even be independent for long. The logic of co-dependence is to expand that dependency beyond the borders and make the region and then every part the world dependent on one another to balance out the numbers. 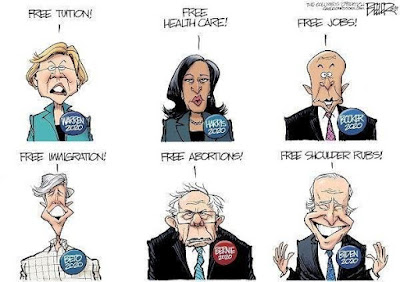 … the light of Independence Day fades and the crowds slowly trudge away from the brief spectacle, past the lines of police barricades, through narrow streets, past government buildings, back to their co-dependent lives in a co-dependent nation where the will of the people and the rights of the individual matter less than the latest proposal to solve the problems of their independence by making the country a more dependent place.
--------------


Corporate America's Virtue-Signaling Is Opportunist, Dangerous, And Undermines The Spirit Of Capitalism
Authored by Robert Bridge via RT.com
Fri, 07/05/2019 - 21:45
https://www.zerohedge.com/news/2019-07-05/corporate-americas-virtue-signaling-opportunist-dangerous-and-undermines-spirit

Once upon a time, the raison d'être of US companies was to simply make a buck. Those days are long gone. Today, corporations are in the business of radicalizing the country by taking sides in cultural standoffs.

… (Nike) The Fortune 500 tennis shoe maker, with $30 billion in annual global sales, announced it would cancel the release of its ‘Air Max 1’ trainers after former NFL quarterback Colin Kaepernick told the company “he and others” found the Betsy Ross-era flag that adorned the sneaker “offensive.” Why? Because the symbol was stitched at a time when slavery was still part of the fledgling nation’s experience. And since a handful of right-wing ‘white supremacist’ groups have reportedly been seen waving this flag (as well as former President Barack Obama, incidentally), which celebrates the original 13 US colonies and their successful fight against the British crown, suddenly it is deemed toxic and unworthy of the mighty Nike.


… Considering everything that is at stake, it would seem far more expedient for corporations to stick to the capitalist credo of making a profit and distance themselves from the cultural battles now raging across the land. Nothing less than the very survival of American democracy, which provides the groundwork for free markets and capitalism, is at stake.
---------------

Many free marketers now are silent at the absurdity of socialist Democrats' free-free promises, but very vocal at frequently attacking Trump who plans to cut those endless freebies. It's all about personal hatred and angst against the man.

Contrast the leading Democrats with this leader,

“Here, in the United States, we are alarmed by new calls to adopt socialism in our country. America was founded on liberty and independence — not government coercion, domination, and control. We are born free, and we will stay free.”
— President Donald Trump, State of the Union Address February 5, 2019.
https://www.washingtontimes.com/news/2019/may/2/america-will-never-be-a-socialist-country/