There is a direct, frank headline from Taiwan News yesterday:


here’s a brilliant, well-thought article from Richard Heydarian today in the Inquirer. He posted in his fb wall with this note:

“My longest column yet, analysing Duterte’s “independent” foreign policy in light of the Reed Bank incident.” 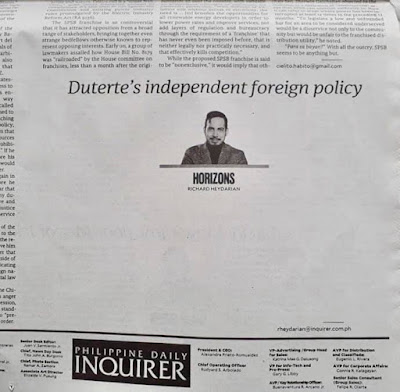 Reposting this observation from my friend, Dr. Jay Batongbacal of UP College of Law:

ANOTHER CULPABLE VIOLATION OF THE CONSTITUTION?

The claim that an "informal" agreement "verbally" entered into is "legally binding" contravenes yet another provision of the Constitution.

Sec. 21 of Art. VII very clearly states that "No treaty or international agreement shall be valid and effective unless concurred in by at least two-thirds of all the Members of the Senate."

The only accepted exception to Art. VII, Sec. 21 is an executive agreement, which is allowed without Senate concurrence because it merely implements existing treaty obligations, laws or policy. But changes in national policy requires a full-fledged treaty subject to Senate concurrence. A purported agreement to allow China to fish in the Philippine EEZ contrary to the 1987 Constitution and implementing laws obviously is a radical change in national policy, and does not have any legal precedent at all. It cannot be subject of a mere verbal agreement, even assuming that it were possible.

Thus, Sec. Panelo's claim that PRRD's verbal agreement to allow Chinese fishing in the EEZ is legally binding cannot be anything that another culpable violation of the Constitution, on top of the unconstitutionality of failing to protect the marine wealth of the country in its EEZ and failing to reserve the benefits thereof exclusively to Filipino citizens. Instead of downplaying the magnitude of PRRD's purported agreement by describing it as "informal" (implying it is not a treaty), describing it as "legally binding" only makes it even worse. In the absence of concurrence by the 2/3 majority of the Senate, no such treaty or international agreement effectively abolishing the reservation of marine wealth to Filipino citizens can be valid nor can it enter into force for the Philippines.

rom another friend from UP, Bernard Ong:

Without Duterte’s ‘thoughtless, senseless toilet paper’, there is no presidency.
Duterte is unwilling & unable to function as PH president. I consider him China’s puppet, not Philippine president.

This is a shameless President.
Kowtowing to a communist dictatorship in Beijing.
Where rule of law is a joke, only the rule of the Communist Party matters.
---------------

Posted by Bienvenido Oplas Jr at 11:57 AM