The Philippine Statistics Authority (PSA) has reported that the country’s lowest inflation rate this year and last year, or over the span of 18 months, was 2.7% in June. This is indeed good news and can be traced to two major factors.

One, lower world oil prices. The WTI (West Texas Intermediate) June average price was only $54.7 a barrel vs. April’s $63.9 and May’s $60.8 a barrel. Two, the implementation of the Rice Tariffication Law (RTL, RA 11203) where the quantitative restriction (QR) over rice was removed and larger supply of cheaper imported rice from our neighbors came in.

Still, the Philippines has the highest inflation rate among more mature East Asian economies year to date 2019 where six of the 11 economies listed have inflation rate of below 1% (see Table 1). 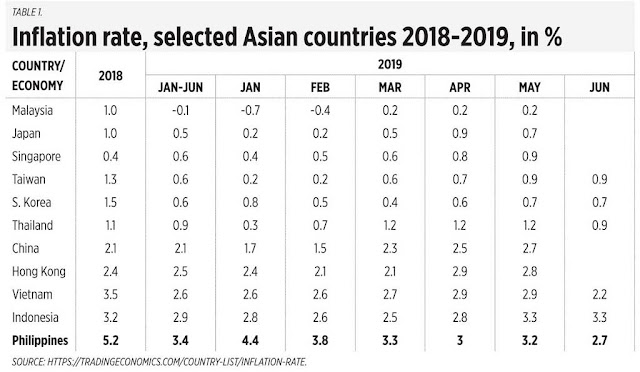 China is feeling the pinch this year thanks to its trade conflict with the US — its inflation rate was rising consistently from 1.5% in February to 2.7% in May.

I checked the monthly inflation rate by commodity groups and compared the Philippines’ numbers with those of the National Capital Region (NCR). Of the 11 groups, eight have similar country and NCR values, but three groups diverge or look like outliers. These are Alcoholic Beverages and Tobacco (ABT), Transport, and Education. The difference between NCR and Philippine inflation is derived in Table 2. 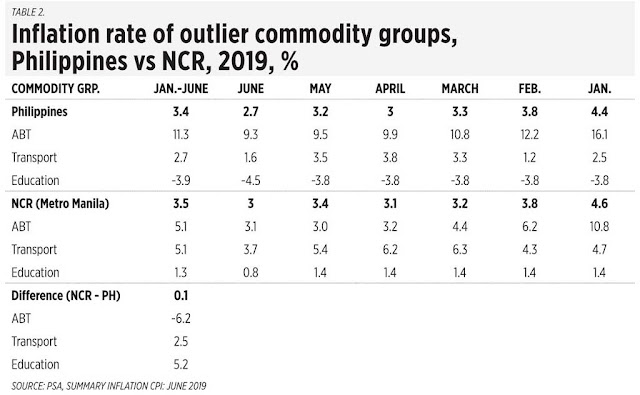 Let me focus on the higher inflation for Transportation in the NCR vs Philippines overall, in relation to the transportation network vehicle service (TNVS) “strike” yesterday due to the more costly restrictions of the Land Transportation Franchising and Regulatory Board (LTFRB),

The inefficient public transport system in the NCR and other big cities in the country force many people who do not want the inconvenience of taking multiple rides from house to work, grocery or school and back, to drive their own cars or motorcycles. Which further worsens traffic congestion.

The alternative to driving one’s own car or motorcycle in heavy traffic (then endure the difficulty of finding often expensive parking) is to take a taxi or TNVS. Most car owners prefer TNVS than taxis because of transparency, safety, and tech-based convenience. When there are not enough TNVS around, the waiting time and fare go up, which contributes to high transport inflation in NCR.

Beyond the low world oil prices, RTL, reducing interest rates or certain taxes, there are administrative measures that can help bring down inflation. In this case, the LTFRB should expand, not restrict, the supply of TNVS, taxis, and buses with deregulated routes and fares. More competition will bring down public transport costs, and more people will leave their cars or motorcycles at home on weekdays.
-----------------