Among the promises of the Solar Para sa Bayan Corp. (SPBC) franchise bill now awaiting President Rodrigo Duterte’s signature are 24/7 electricity in far away villages, and cheaper electricity because the sun’s rays are free.

True, the sun’s rays are free, but the solar panels, the power conditioning unit, main panel, AC and DC disconnect, other components are not free. Transportation and installation in far away areas and connection to the grid are not.

Add to that the cost of a battery to extend the power for few hours at night, plus the cost of backup diesel gensets since solar does not generate power at night and hardly produces power on days with thick clouds and rain. Solar components plus battery plus gensets cannot be cheap and power stability is not assured.

In a site inspection by the Philippine and Rural Electric Cooperatives Association Inc. of some barangays in Occidental Mindoro served by SPBC in November 2018, they found that residents experienced an average of two- to three-hour brownouts plus frequent on-and-off power outages every day, resulting in damaged appliances, and that the rate charged started at a low P2.34/kilowatt hour (kWh) which later rose to around P11/kWh.

Instead of favoring one particular energy firm, we need more big conventional power plants. Compared to more stable economies in Asia, the Philippines has among the lowest installed power capacity and, by extension, among the lowest electricity generation. Our capacity in 2016 was just one-half of that in Thailand, Vietnam, and Taiwan (see table). 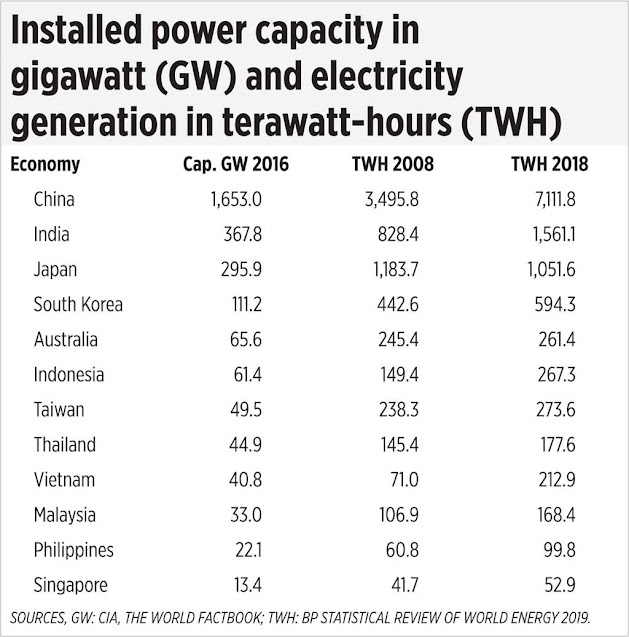 People who want “green energy” and do not want to use electricity from fossil fuels without putting up a rooftop solar system (and cut or murder nearby tall trees that provide shade and reduce solar output) can actually get their wish via the retail competition and open access (RCOA) provision of the EPIRA (Electric Power Industry Reform Act) of 2001 (RA 9136). Contestable customers can choose their own licensed retail electricity suppliers (RES) and specify that they should be provided only renewable energy like hydro, geothermal, biomass, solar, or wind. The price might be higher but they get what they want. This will also send a signal to power investors to develop more renewables because customers are willing to pay the higher price without the need for subsidies from all electricity consumers nationwide, without need for new legislation.

We should not have enacted a law that gives a guaranteed price for renewables for 20 years via feed in tariff (FIT) as this violates market competition and disempowers consumers — they cannot say “No” to additional charges like the FIT-Allowance slapped into their monthly electricity bill for 20 or 25 years.

We should not add more energy distortions by having that “Solar para sa Politika” franchise bill become a law. President Duterte should veto it.


Finally, the Supreme Court should lift its TRO on the Energy Regulatory Commission resolutions on RCOA’s implementation. The threshold for contestable customers should have been down to 500 kilowatts or lower by now. The number of competing RES should be plentier by now. And the choices of consumers for their power generators and suppliers should be many, not few and restricted.
--------------