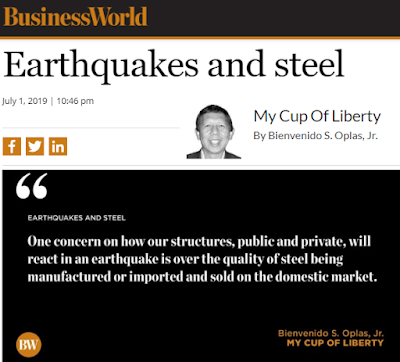 There is understandable concern about the resilience of our structures, public and private, in withstanding earthquakes. But there is also alarmism being spread about the “Big One” happening soon in the Philippines.

In late June, we experienced about 22 earthquakes a day on average and historically, we have experienced seven strong earthquakes with a magnitude of 7 to 7.9 since the 1960s (see Table 1).

In my opinion the earthquake referred to as the “Big One” (8.0 +) happening in the Philippines is a long ways from happening and seemingly impossible in the short run. Since we have frequent earthquakes, then the stress between and among plates underground is reduced. Worldwide, strong earthquakes (magnitudes of 5 and above) occur at an average of 1,700+ a year or about five a day (see Table 2).

One concern on how our structures, public and private, will react in an earthquake is over the quality of steel being manufactured or imported and sold on the domestic market — in particular, the use of quenched tempered (QT) or thermo-mechanically treated (TMT) steel bars. Major steel manufacturers here are replacing micro-alloyed (MA) steel bars with QT rebars because of the lower cost of the latter.
As I am neither an engineer nor architect, I could not comment on the various advantages and disadvantages of using QT over MA steel bars in terms of quality relative to price. Then I saw a documentary, Veronica Files, Episode 1: Lindol vs Bakal in which Veronica Baluyut interviewed engineer Emilio Morales, former chairman of the committee to update the National Structural Code of the Philippines (NSCP) 2015, also the former chairman of the Association of Structural Engineers of the Philippines (ASEP).

Mr. Morales argued that it is not advisable to use QT bars in buildings because bending, threading, or welding will damage the stonger outer layer and expose the lower-grade steel inside the bar, which reduces the structure’s strength and resilience.

Again, this is engineering stuff and outside my field so I will not comment on proposals to restrict or ban the sale of QT bars. I believe that nothing should be banned except those few expressly harmful acts like murder, stealing, destruction of private property, abduction, rape, etc.

But I do support proposals for the public dissemination of information about the types and quality of steel bars being sold domestically. Contractors, developers, and end-users should be made aware of the differences in quality between QT and MA steel bars.