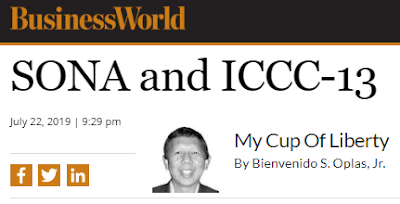 Climate change is natural, nature-made and not man-made. It is cyclical — the warming-cooling-warming-cooling over the past 4.6 billion years of the Earth — and there is no such thing as “unprecedented” global warming.

Climate alarmism relies on endless hype by politicians, multilateral institutions, NGOs, and media. Luckily, President Rodrigo Roa Duterte is among the very few country leaders who does not join the hype. I checked his past three State of the Nation Addresses (SONA), the number of words, including ad libs and jokes, and compared mentions of “climate change” (CC) or “global warming” (GW) (See Table 1). 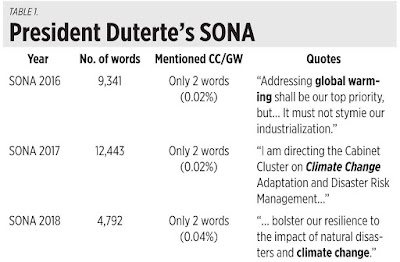 This should be among the few instances where I say, “Thank you, President Duterte” for not adding to and fanning the climate alarmism.

Which leads me to a related topic, the 13th International Conference on Climate Change (ICCC-13) this coming Thursday, July 25, in Washington, DC, USA. The annual ICCC is sponsored by the free market think tank Heartland Institute.

I attended ICCC-2 in New York City in 2009 and ICCC-4 in Chicago in 2010. It was those very technical lectures from known scientists in the fields of geology, meteorology, climatology, physics, astronomy, chemistry, biology, that further convinced me that CC is natural and cyclical. That natural factors like the Sun, galactic cosmic rays (GCRs), clouds, water vapor, the oceans (PDO and AMO), etc., are the bigger drivers of planet Earth’s climate, and not a quantitatively insignificant gas, carbon dioxide (CO2), that comprises only 400 parts per million (i.e., 0.04%) of total greenhouse gas molecules in the atmosphere.

The ICCC-13 will feature some big names in climate science. Among them: Dr. Richard Lindzen, professor emeritus of meteorology at the Massachusetts Institute of Technology; Dr. Patrick Michaels, past president of the American Association of State Climatologists; Dr. Tim Ball, former climatology professor at the University of Winnipeg, Manitoba, Canada; Dr. Jay Lehr, a hydrologist and Senior Policy Analyst at the International Climate Science Coalition; Dr. Roy Spencer, Principal Research Scientist at the University of Alabama in Huntsville (UAH) and former Senior Scientist for Climate Studies at NASA’s Marshall Space Flight Center; Dr. David Legates, professor of climatology at the University of Delaware; Anthony Watts, a meteorologist who operates the world’s most viewed website on climate, wattsupwiththat.com; and Lord Christopher Moncton, a British mathematician and former Special Advisor to Prime Minister Margaret Thatcher from 1982 to 1986.

The world’s four biggest economies in terms of GDP size are also the world’s biggest coal users, and many previously undeveloped/poor countries are now among the world’s major economies and they are major coal users (see Table 2). 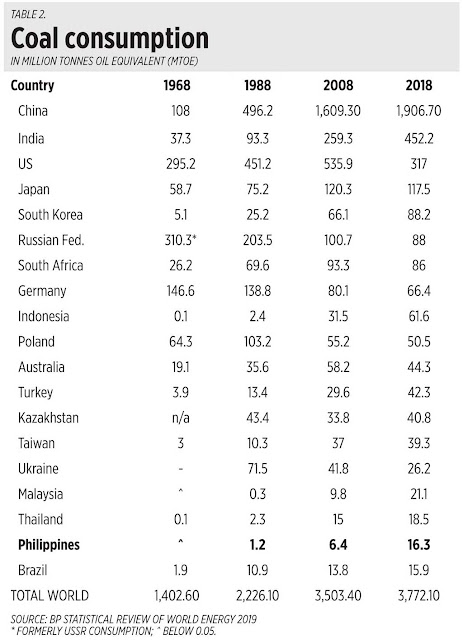 To demonize fossil fuels while at the same time using lots of fossil fuels (for cars and buses, boats and airplanes, power and electricity) is double talk. To demonize CO2 as a bad “pollutant” gas is anti-science because the gas that we humans exhale is CO2, we do not exhale pollution. The gas that our plants and crops use to produce their own food via photosynthesis is CO2, so more CO2 means more plant food, more trees and more food production.
--------------