Populism, or the appeal to pacify the masses and demonize the corporations and “elites,” seems to be getting louder under the Duterte administration than under its predecessors. I will briefly discuss three sectors — water supply, power development, and mining in this light.

See these reports in BusinessWorld this month:

Report No. 1 is about the Supreme Court ruling requiring distribution utilities (DUs) to implement a competitive selection process for their power supply agreements (PSA), and plans to amend the EPIRA law of 2001 (RA 9136), with some activists suggesting that government should lead again in power generation and supply.

Not good. When government, via Napocor, was the monopoly power generator until the early 1990s, it was good at expanding public debt while power supply was limited. Some 17 years after the EPIRA law, the Philippines’ power generation has more than doubled from 47 terawatt-hours (TWH) in 2001 to nearly 100 TWH in 2018 (see Table 1). Genco competition and the EPIRA law are working. 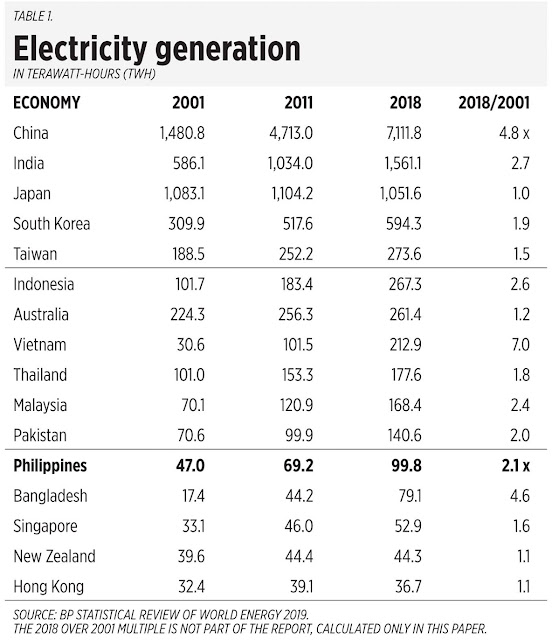 Report No. 2 is about Presidential Spokesperson Salvador Panelo’s implicit agreement with proposals by leftist activists that “handling of water services in Metro Manila… should be returned to the government.”

Wrong. When government, via MWSS, was managing water until 1996, only about 26% of Metro Manila residents had 24/7 water service and the system loss via water pilferage was around 63% of total water production. After water privatization in 1997, system losses went down to 12% and most metro residents had access to 24/7 water.

Besides, the “problem” of the Philippines and other tropical countries is that we have so much rain water yearly, not less; so more floods, not less. What we lack are dams and lakes, man-made and nature-made water impounding areas to store the huge volume of flood water.

Data from the Food and Agriculture Organization (FAO) showed that in 2014, the Philippines had natural water production of some 479 billion cubic meters, higher than in South Korea, Thailand, Vietnam, and Japan, yet we do not hear of these countries experiencing a “water crisis” (see Table 2).

Report No. 3 is about the multiple clearances and permits needed from agencies, from the local to the national like the National Commission on Indigenous Peoples, that result in overlapping functions and opportunities for corruption and extortion.

This is related to No. 2 above. We need more open pit mining, not less. Mined out areas are deep wide areas that can become natural water catchments and dams, suitable for fishery, tourism, hydro power, and as potable water sources someday.

Populist sentiments are based on emotion, not reason. Based on nationalist and socialist nirvana, not hard data. Government should proceed with more privatization and more competition in power generation, water development, and mining.
--------------

Posted by Bienvenido Oplas Jr at 10:48 AM