Among the records of the outgoing Congress is the legislation of a cronyist bill, the Solar Para sa Bayan Corp. (SPSBC) franchise. It is so unpopular that perhaps all other power developers and generation companies (gencos), both conventional and renewable energy (RE), perhaps all private distribution utilities (DUs) and electric cooperatives (ECs) in the country have opposed it.

Among the questionable, cronyist provisions of HB 8179 are the following:

One, it originally wanted a nationwide franchise in electricity distribution for unserved and underserved areas, later limited to 16 provinces plus certain cities and municipalities of Batangas and Quezon, for a total of 18 provinces. No other franchised DUs or ECs have this privilege.

Two, there is nothing significant in its power generation but it has a franchise while all other gencos including other RE developers do not have a franchise. SPSBC claims it is competitive yet it requires a Congressional franchise and a franchise by nature is a monopoly, anti-competitive.

Surprisingly, the Department of Energy (DoE) and the Energy Regulatory Commission (ERC) did not raise strong opposition to the franchise bill. Perhaps the reason is that the mother of the majority owner of SPSBC is the Chairperson of the Senate Committee on Finance, which handles the budgetary appropriation of government agencies.
Four, a new insertion in the bicameral report — not in the original HB 8179 and seemingly just came out of thin air — expanded the definition of an “underserved area.” The Chairman of the Senate Committee on Energy, Senator Sherwin Gatchalian, gave an Objection Speech (June 3, 2019) to HB 8179 as amended by the Senate and argued that the bicameral report should not be ratified. His objection was based mainly on the said insertion, where underserved areas now include “where electricity services have been interrupted at least twelve (12) times in the twelve (12) months preceding the date of the determination that such area is underserved.”

Sen. Gatchalian cited two reasons why this insertion is wrong: (a) “There is no basis for the frequency of interruptions indicated in the bicameral report. Currently, the standard for the frequency of interruptions is determined by the ERC and is updated regularly… To legislate a regulatory parameter would tie the hands of the regulator…”, and (b) “there is no definition of the word ‘interruptions’ in the bicameral report… frequency interruptions are not only a function of the performance of the DU but also of power plant performance, availability of power supply, kind of power plant, and even calamities… to legislate a low and unfounded bar for an area to be considered underserved would be a disservice not only to the community but would be unfair to the franchised DU.”

The SPSBC franchise bill appealed to the gullible public because it somehow presented itself as a solar power company — and solar is cool; it helps “save the planet” while giving “cheap, reliable” power to the public.

Even among the richest economies in the world which have wide solar farms — Germany, Italy, and Australia. among them — the contribution of solar to total electricity generation remains low. And many of our neighbors in East Asia like Hong Kong, Singapore, Indonesia, Malaysia, Vietnam, and Taiwan have zero or very small solar contribution to their power generation (see table). 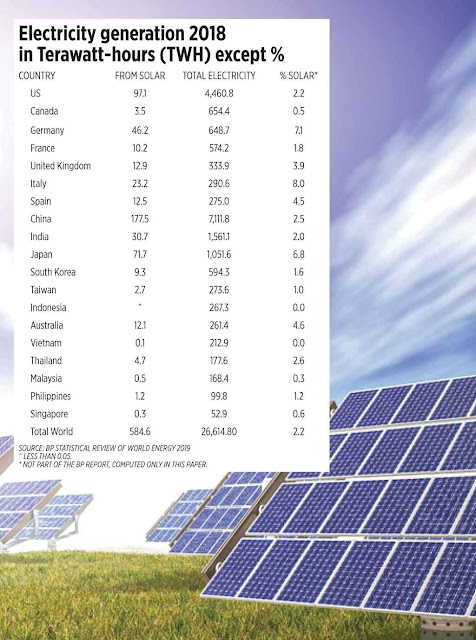 The SPSBC franchise bill is a political project that favors a single newbie corporation. President Duterte should veto it. If he signs it into law, it will set a new precedent and pave the way for many other cronyist bills to be filed in the next three years. This will further weaken the EPIRA law and weaken the rule of law in the country.
----------------