IPR and Innovation 44, Plain packaging on sweets, soda -- impact on investment and health

The brand- and trademark-busting policy of generic plain packaging, started first with tobacco products, is now moving to sweets, soda, cakes and so on. State nannyism is becoming a monster year after year.


THE CASE FOR A NEW APPROACH TO PUBLIC HEALTH AND PREVENTION
https://www.ippr.org/files/2019-06/public-health-and-prevention-june19.pdf

To combat the obesity epidemic, Cadbury, Walkers Crisps, Coca-Cola and other major brands would be forced to abandon their vibrant designs.

Instead they would be compelled to use a uniform drab design intended to put off consumers. This would be in line with the greeny brown colour – chosen for its ugliness – seen on cigarette packs….

Simon Stevens, who is chief executive of the NHS, said last week that obesity was becoming the ‘new smoking’. 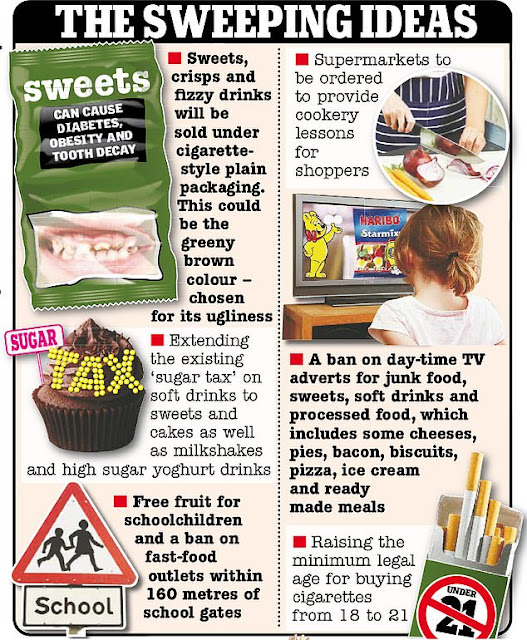 The proposals from the Institute for Public Policy Research, an influential think-tank, also include:

* Extending the sugar tax on soft drinks to sweets and cakes as well as milkshakes;
* A ban on day-time TV adverts for junk food, sweets, soft drinks and processed food;
* Free fruit for pupils and a ban on fast-food outlets within 160 metres of school gates;
* Supermarkets to be ordered to provide cookery lessons;
* Raising the legal age for buying cigarettes from 18 to 21.

From the smoking ban in 2007 to the introduction of plain packaging a decade later, everything has been done to discourage people from taking up the habit.

And there are signs sugar is heading the same way.

Sugary drinks are already taxed - and now a leading think tank has even suggested sweets, snacks and sugary drinks should be wrapped in plain packaging to make them less appealing, given the excess consumption of the sweet stuff….

The Institute for Public Policy Research also calls for the products to be taxed, their adverts banned from daytime TV and for supermarkets to fund healthy cooking classes for customers.

Critics say plain packaging, like with cigarettes, will make shops “grey and boring” and do nothing for waistlines.

But the IPPR’s research found two decades of progress in reducing preventable disease has stalled since 2012.

5. In defence of food advertising
Chris Snowdon, 30 MAY 2019
https://velvetgloveironfist.blogspot.com/2019/05/in-defence-of-food-advertising.html?m=0

The Department of Health's consultation on banning adverts for HFSS (high in fat, sugar and salt) food and drink before 9pm on television closes on June 10th. The government's various allies and sockpuppets have been encouraging people to make a submission so I thought I would too.

Banning advertising is a hunch-based policy, but the Department of Health's impact assessment is obliged to make it look evidence-based…

There is no meaningful difference between the state banning an advert because it disapproves of the product being advertised - or the views of the person featured in it - and the state censoring an article, speech or play being it doesn't like what is being said. If a ban on cakes, ice creams and jam being advertised before the watershed becomes law, it will give licence to every obsessive, single-issue fanatic to press for further prohibitions. Once we start banning inoffensive adverts for harmless products, the censoriousness will become a runaway train.

The sky is the limit when one believes there is no downside to plain packaging. For example, there even have been calls in Australia to plain package financial services — lest consumers be induced by brands to take on bad loans.

With plain packaging, trademarks will cease to serve their function to distinguish one producer from another. This will ultimately hurt consumers.

Ultimately, the question is whether taking such a radical step as removing trademarks from legal products that consumers trust and rely upon will be beneficial for a country overall.
And what could come next?

Just last month The Lancet published the “Global Syndemic of Obesity, Undernutrition, and Climate” which called for advertising restrictions on all “unhealthy food” in order to protect the environment.

By spreading to more industries than tobacco plain packaging has the potential to disrupt major industries and trade relationships. Far more countries are stakeholders in the targeted food, sugar, and beverage industries. These categories contain the most well-known and valuable brands in the world -- many headquartered in the United States.


Statists still do not realize that nature abhors a vacuum: penalize and restrict the legal, unique supply, the illegal and easy-to-copy generic supply will fill the gap. These illegal products are a lot cheaper and hence they will encourage more consumption of the targeted 'bad, unhealthy' products. In addition, the investment climate will sour for legal brands as the illegal brands undermine them.

The nanny state and its activist advocates ultimately will go for socialism and heavy-handed interventions and prohibitions. Soon people can go to jail because they ate the unique, non-plain packaged soda or cake or candy. What a lousy society it will be then.
---------------