Energy 127, Power underwhelming: Why are there power outages?

This is a special report by BusinessWorld last June 17 where I was one of the resource persons they have interviewed. Enjoy. 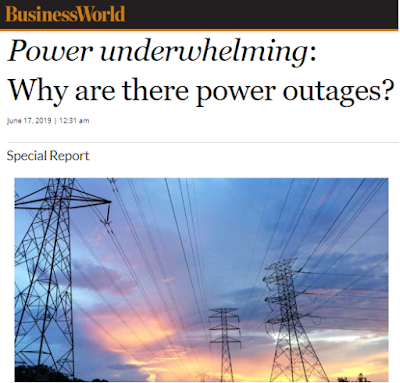 Power underwhelming: Why are there power outages?

IN THE PHILIPPINES, one would have to get used to brownouts, or the drop in voltage in an electrical power supply system. Whether or not it is intentional, these outages have wide-ranging effects on the economy: households would experience no electricity for a few minutes or even for hours, causing great inconvenience; businesses would incur higher costs by way of lost revenue and reduced productivity; and investors would be hesitant to do business, leading to reduced investments.

The Luzon grid has had episodes of “yellow” alerts since March due to high electricity demand outstripping supply as well as unscheduled outages of power plants. The first yellow alert, which occurred on March 5, saw peak demand for the day reaching 9,491 megawatts (MW) against the grid’s available capacity of 10,115 MW with an operating margin at just 624 MW — falling short of the required contingency reserve of 647 MW.

NGCP, which is the private firm that operates, maintains, and develops the country’s transmission network, issues these alerts whenever energy reserves are inadequate. The grid operator has several levels of reserve energy that it uses to stabilize the fluctuating power demanded from the electricity grid.

One, there is a “regulating” reserve, which is the standard operating requirement to maintain a balance between available capacity and system demand. This is ideally equivalent to around four percent of peak demand.

On top of the regulating reserve, the NGCP maintains a “contingency” reserve that it allocates to immediately cover the loss in supply when the largest power generating unit online — usually at around 600 MW — fails to deliver.

This number far outstripped the number of yellow alerts in the previous years, according to consumer advocacy group CitizenWatch Philippines’ “PowerPlant Watch.”

“Comparing this to previous years, we had only seven instances of yellow alerts in 2018 and only three during the same period in 2017,” wrote Hannah Viola, convenor of CitizenWatch and energy fellow at Stratbase ADR Institute, in her column in BusinessWorld titled “A Call for Energy Transparency” published on April 9.

Bienvenido S. Oplas, Jr., columnist for BusinessWorld, economist, and president of Minimal Government Thinkers (MGT), noted in an e-mail interview the Philippines’ power capacity as being “far out from many neighbors in East Asia.”

Citing data from the Central Intelligence Agency’s World Factbook, Mr. Oplas said the Philippines, which has a population of at least 100 million, has a lower power capacity per person compared to neighboring countries such as those of Vietnam, Malaysia, and Laos at 2.1 times, 4.9 times, and 4.9 times, respectively.

LACK OF POWER PLANTS, DE-RATINGS
Industry players and analysts said this scenario could have been avoided had there been more power plants available to compensate for those undergoing unscheduled shutdowns or maintenance.

However, results of a study from the Energy Regulatory Commission (ERC) released in May showed that up to 72% of these power plants are at least 16 years or older, which may have contributed to the grid’s power deficiency this year.

DoE Undersecretary Felix William B. Fuentebella said in a separate e-mail interview that the occurrence of unplanned and forced outages were considered in the DoE’s assessment of the 2019 summer supply and demand outlook as well as the potential impact of El Niño.

“However, the simultaneous breakdowns were not expected in spite of the preparation and availability of the interruptible load program during the red alert statuses, which resulted in manual load drops,” Mr. Fuentebella said, adding that the delays in the entry of committed power plants “contributed to the limited capacities” in the Luzon grid.

Meralco’s Mr. Fernandez said they have noticed the demand for power has been growing faster in the rest of Luzon compared to the Meralco service area.

“However, it was really the unplanned and forced power plant outages and the delayed entry of new generation capacity that caused the alerts this year,” he said. “This thinning power supply, paired with rising power demand, combine to create a less than ideal power situation.”

“I think the unforeseen factor there was the ‘old plants’ factor; just many of them went on unscheduled shutdowns,” MGT’s Mr. Oplas said.

A closer look at available data showed plants currently online include those built way back in the 1940s and 1950s — plants whose efficiency has eroded through the years.

Two of these plants are located in Luzon — the Caliraya dam-type hydroelectric power plant (HEPP) and the Botocon run-of-river type HEPP, both located in Lumban, Laguna. These plants were commissioned in the early to mid-1940s.

Adding to the forced and unforced outages, the lack of supply is also attributed to plant de-ratings, which happens when a power plant is operating at less than its maximum capability in order to prolong its life.

“The current situation of our power plants and the continuously rising demand suggest that it would be beneficial to our grid if new capacities are built so more supply and reserves are available,” said Meralco’s Mr. Fernandez.

For MGT’s Mr. Oplas, the lack of new peaking power plants being built is also a concern. These are power plants that are generally run when there is high demand or only during peak times.

The economist explained there is little to no incentive in putting up these peaking plants as they can only sell through the Wholesale Electricity Spot Market (WESM), which has installed price caps to protect consumers from excessive price spikes.

“There should be incentives for developers of peaking plants that may be idle for nine to ten months per year, then running only for a few hours per day on hot months… Even if they charge high, say five to ten times the average WESM clearing price on certain hours, it’s still cheaper compared to having massive blackouts, or the poor buying candles (and have more fires) or the middle class and rich buying more generator sets (and have more air, noise pollution),” he said.

“When demand is high during hot months, baseload and mid-merit plants cannot deliver extra,” he explained.

Joe R. Zaldarriaga, Meralco assistant vice-president and public information office head, said the government and power plant operators should look into the causes behind these power plant outages and address them accordingly.

“It would be best to explore ways of better operating, maintaining and sustaining the various power plants and keep them running efficiently. The government should also continue identifying projects of national significance, like large power plants and transmission facilities, and help fast-track their construction and operations,” he said in an e-mail.

DELAY IN POWER SUPPLY DEALS
According to DoE’s Mr. Fuentebella, common hurdles faced by proponents in pursuing new power projects include “licensing/permitting challenges” as well as access to financial packages.

For his part, MGT’s Mr. Oplas noted the “thick, wide bureaucracies” in the local and national levels when applying for a power plant project.

Meralco’s Mr. Zaldarriaga said for power projects, long-term planning is crucial as the construction of a power plant, which includes the permitting process takes more than five years to achieve.

Business groups have been calling for the construction of power plants to ensure ample long-term supply of electricity. However, hampering efforts is the delay in the approval of power supply agreements (PSA), which is a bilateral agreement between a generation company and a distribution utility for the purchase and supply of power.

A PSA is typically a critical milestone for power projects as these are signed before construction of a power plant starts to reassure banks that the plant will have ready buyers for its output.

The Supreme Court (SC) ruled last month that all PSAs submitted by distribution utilities to the ERC on or after June 30, 2015, must undergo what is called a competitive selection process (CSP).

CSP requires contracts between power generation companies and distribution utilities to be subjected to price challengers, a process that is aimed at lowering electricity cost.

The decision affected seven PSA applications that were filed by Meralco that covered 3,551 MW. The contracts were signed on April 29, 2016, a day before the April 30, 2016 extended deadline set by the ERC.

The ERC promulgated CSP in November 2015 but had to restate its effectivity date to April 30, 2016 through a resolution issued in March 2016. It said the move was prompted by letter-inquiries from distribution utilities and generation companies assailing the legal implication of the CSP to existing power supply deals.

The Atimonan project, whose PSA was filed in 2016, consists of two ultra supercritical coal-fired power plants with a capacity of 600 MW each. It was originally expected to be completed by 2021, but has since faced several regulatory issues. The company now looks to complete the project by the fourth quarter of 2025.

The high court ruling is viewed as a mixed bag, according to the sources interviewed by BusinessWorld.

DoE’s Mr. Fuentebella said the ruling is a welcome development in the power industry.

“While ensuring transparency, competitiveness, and reasonableness of the power supply cost, it will provide an opportunity to enhance the power supply agreements between the generation companies and distribution utilities that will eventually redound to the benefits of the electricity consuming public,” Mr. Fuentebella said.

For MGT’s Mr. Oplas, it is more of a net negative as this will further delay the construction of power plants.

“It is now 2019 and [the] SC wants to backtrack CSP ruling to PSAs made four years ago? ERC and SC should focus on enforcing CSP only to new PSAs,” the economist said.

Nevertheless, Meralco has said that they will respect the SC’s decision.

“Meralco respects, honors and abides by the SC ruling on [the CSP]. Moving forward, we will conduct CSP to ensure availability of quality, stable and cost-competitive supply in the country,” Mr. Zaldarriaga said.

“Meralco PowerGen, through its subsidiaries, will also work with all the concerned parties and agencies to ensure that planned power plants progress and to have these up and running as soon as possible,” he added.

So far, there are 19 private sector-initiated power plant projects in Luzon targeted to go online between this year and 2023, data from the Energy department as of end-2018 showed. These facilities are expected to have a combined committed capacity of 4,774.8 MW.