Are things in the labor force really improving? To answer this question, I backtracked and got data for the past five years, not just the last year. The numbers are interesting (see table 1).

One, the LFPR is declining. Meaning more people are postponing joining the labor force, choosing instead to pursue more studies or internships, or bum around. The K+12 must have contributed to this trend too. When LFPR is declining, both unemployment and underemployment rates tend to decline because those who join the LF are more equipped and more confident that they will be hired as full-time or part-time workers or entrepreneurs.

Two, both rates of unemployment and underemployment (people who work below 40 hours a week, or those already working above 40 hours but want additional work) are indeed declining and hence, the employment rate is increasing.

Three, compare election years 2016 (Aquino) and 2019 (Duterte) — higher LFPR in the former. In terms of absolute numbers in LF, 43.3 million vs. 44.5 million, or an increase of only 1.2 million in LF over three years, an average of 0.4 million per year was added to the LF under the Duterte administration. This is not good.

Among the employed people, how is the labor productivity of the Philippines compared with its neighbors in East Asia?

I checked the International Labor Organization (ILO) Database (ILOSTAT) for Key Indicators of the Labour Market (KILM). Numbers show that ours is lower than Indonesia, Thailand, Malaysia, but higher than average for world lower middle income (see table 2). 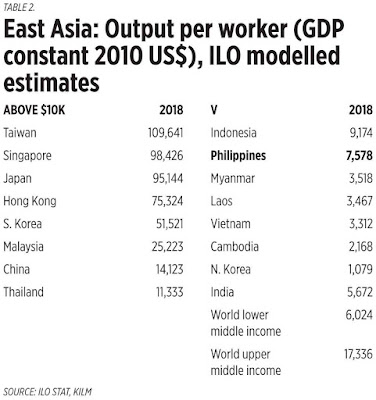 I also checked the same database from ILOSTAT-KILM for the unemployment rate covering many countries. There seems to be wrong data for the Philippines 2017: an unemployment rate of 2.6%, and a combined rate of unemployment and potential labor force (LU3) of 5.9%. What??

The market-oriented reforms for efficiency (MORE) for the Philippines in the labor sector — more competition and deregulation, more investments and entrepreneurship, investors hiring more workers or people hiring themselves as entrepreneurs — mean faster growth.

The main hindrances to this — more/higher taxes and fees, more bureaucracies and business permits that take a long time to be secured, government-created monopolies and oligopolies via congressional franchising, agency and local government franchising, and low respect for rule of law.