In terms of per capita income and by extension individual productivity, the US is far way ahead of China, a multiple of more than 6x. The Philippines, while having the 13th largest population in the world, is a midget, both in GDP size and per capita income (see table 1). 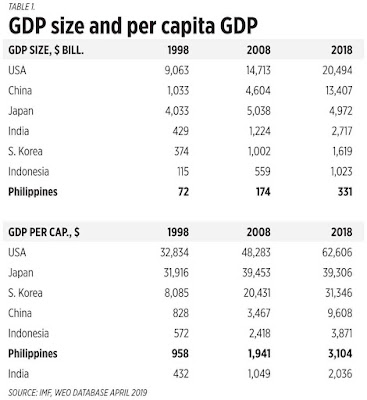 Among the major sources of disagreement between these two giant economies is merchandise trade. Data from the World Trade Organization’s (WTO) World Trade Statistical Review (WTSR) show that China is the world’s biggest exporter and the US trade deficit is indeed large, $863 billion in 2017 or average of $2.4 billion a day (see table 2). 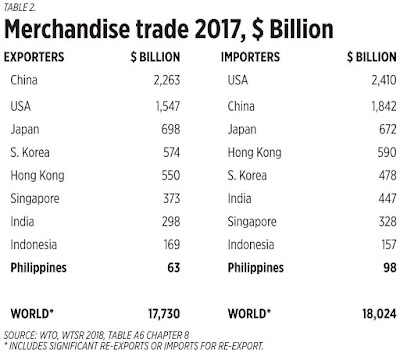 People often talk about “protectionist Trump/US” and they imply that China, EU, etc. are non-protectionists and free traders. They may be jokers.
Here at the Jeju Forum for Peace and Prosperity 2019 Conference, May 29-31, the first plenary discussion on Day 2 is on the subject, “Destined for War? The Future of US-China Relations and its Implications for the Korean Peninsula.” The three speakers were Prof. Graham Allison of Harvard University, Li Zhaoixing, former Foreign Minister of China, and Prof. Martin Jaques of Cambridge University. Moderator was Prof. Moon Chung-In of Yonsei University and Special Advisor to the ROK President for Unification and National Security Affair. Congratulatory remarks before the discussion started were given by Wang Guoqing, former Vice-Minister of the State Council Information Office, China.

Wang talked about the importance of Asia, did not lambast the US. Li talked about peace, repeatedly. Allison talked about a possible “2nd Korean war” that would also involve the US and China, the “Thucydides trap” where a rising power can wage a war to topple the established power, and indirectly attacked Trump. Jacques talked about a “new cold war” where before, the US was a rising power, now a declining power as China is now the world’s biggest economy, a technological superpower, and in this trade war, the US will suffer.

My impression is that the two Chinese ex-government officials were hoping for more peace while the two American academics and consultants were entertaining a new war. In case there will be a shooting war someday between the US and China, it could be partly due to alarmist but influential US academics, US media, and US politicians that tend to exaggerate things.

Meanwhile the Friedrich Naumann Foundation for Freedom (FNF) held its panel discussion in Day 2 here on “Smart Cities and Startups — Opportunities for Business Innovation.” Speakers were Christian Taaks of FNF Korea Office, Marc Bovenschulte of the Institute for Innovation and Technology in Germany, and Prof. Hwang Jie Eun of the University of Seoul in Korea. Moderator was Waltraut Ritter of Knowledge Dialogues in Hong Kong, and Rapporteur was Pimrapaat Dusadeeisariyakul of FNF Thailand. I will write about the discussion and related subjects in my next column.

Peace and prosperity. More trade, investments and tourism among countries and not more bombs and missiles. More smart and innovative cities and countries, not war-freak ones. Tomorrow should be better than today. We should hope and work for this future.
----------------