Metro Manila is composed of 17 cities and has a population of 13.1 million in 2016, the 18th largest city in the world. This 13 million would swell to around 15 million at daytime when people from neighboring provinces come to the big city to study, work, do business and so on. This is big, but not so big compared to other cities around the world like Tokyo, Delhi and Shanghai. Other Asian cities will soon have 10+ million people like Bangkok and Ho Chi Minh (see table). 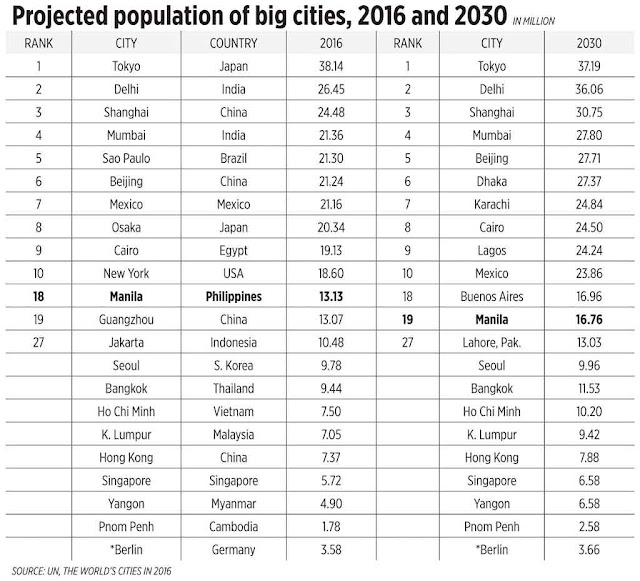 Developing “smart cities” for those huge and densely-populated metropolis is among the important challenges for these micro areas and local governments.

At the recent Jeju Forum for Peace and Prosperity 2019 last May 29-31, the Friedrich Naumann Foundation for Freedom (FNF) sponsored a panel, “Smart Cities and Startups — Opportunities for Business Innovation” with three speakers.

The head of FNF Korea office in Seoul, Christian Taaks, said in his opening remarks that “Smart Cities offer many new opportunities and requires adaptation from individuals. Smart cities need smart citizens and technology is used to empower citizens.”

Moderator-speaker Waltraut Ritter, Founder of the Knowledge Dialogues in Hong Kong, said that Smart cities are about citizens and technology as a platform to empower citizen to become “citypreneurs.” Citizens and local governments interact, unlike before where the mayor seems to “know everything” and has a control of everything in a city. Seoul is a good example with a citizen dashboard project to get feedback from citizens what went wrong in the city.

Marc Bovenschulte, Director of Institute for Innovation and Technology in Germany, said that smart cities are about citizens, an inclusive concept. In theory, ‘Smart Cities’ is an umbrella term for holistic development concepts aiming cities to be more efficient, greener and more socially inclusive. In reality, smart cities have become a playground for big companies to implement new technologies serving traffic control, energy efficiency and camera surveillance security.

Marc added that local governments should create publicly-owned space for business creation and development. He cited the case of Berlin — after reunification, East and West Berlin were both underdeveloped. The East offered affordable stylish culture that attracted young international talents in the arts, culture and lately digital bohemian. Part of this wave created startups. The city government of Berlin initially had no plan to attract and promote startups, then it offered cheap spaces which allowed the growth of a creative mix of arts, culture, entrepreneurs and international exchange.

Hwang Jie-Eun, Chair of Department of Architecture, University of Seoul, said that smart cities and startups provide opportunity for business innovation by using non-optimized urban space for SME technology and products innovation. In particular, the Sewoon Campus project, a 1.2 km megastructure in the heart of Seoul designed in 1967 and now consists of seven shopping centres and urban manufacturing. Traditional SME factories are kept, local knowledge and skills are preserved and this serves as connecting points to enable ecosystem for startups. It is a bottom-up approach.

She added that to manage big data, teams developed several levels of data inquiries. While many cities have policies in place, in practice data is treated as assets, data owners tend to monetize.

When SME manufacturing can be done in the city, when citizens and the local governments regularly communicate to solve problems, when public space is optimized for business innovation and start ups, then mobility of people and goods are made shorter and faster.

City governments in Metro Manila and nearby provinces can devise ways to optimize market and private enterprise innovation, not optimize regulations, restrictions and taxation. The former can empower citizens to a prosperous future, the latter can do the reverse.
---------------