One of the oldest laws in the Philippines yet having a huge and restrictive impact on the modern economy is Commonwealth Act 146 or the Public Service Act (PSA), which was approved on November 7, 1936, or nearly 83 years ago.

That law lists five sectors as “public utilities,” and hence, foreign capital is restricted, if not prohibited. These are (a) transmission of electricity, (b) distribution of electricity, (c) water works and sewerage system, (d) telecommunications, and (e) transportation (land, sea, air).

Where there is restriction, there is limited or no competition and thus, consumers are penalized with the limited choices. The solution is to expand competition, and one proposed legislation is amending the PSA and removing for now sectors (d) and (e), telecommunications and transportation. These are contained in HB 5828 (passed on third reading since September 2017) and SB 1754 (still a Senate Committee Report).

Two relevant news here and I quote portions of those stories:

“Poe, chairperson of the Senate committee on public services, said the proposed amendments seek to address the confusion in the definition of a public utility and public services, which, for several decades, hampered economic growth. ‘Foreign entities would be allowed to come in and invest. The goal is to increase competition, provide better quality services and also to create jobs,’ Poe said.”

“‘Increasing FDI and promoting national security are not conflicting goals. The country can have both as long as proper safeguards are observed’” she (Sen. Poe) said, “Foreign competition can give consumers more genuine alternatives to existing services.”

These are good announcements and there are many numbers to prove this. One is about domestic tourism and domestic airports. In the ASEAN, there are three big archipelagic countries, with their estimated number of islands — Indonesia with 18,100 islands, Philippines with 7,500, and Thailand with 1,400 islands. 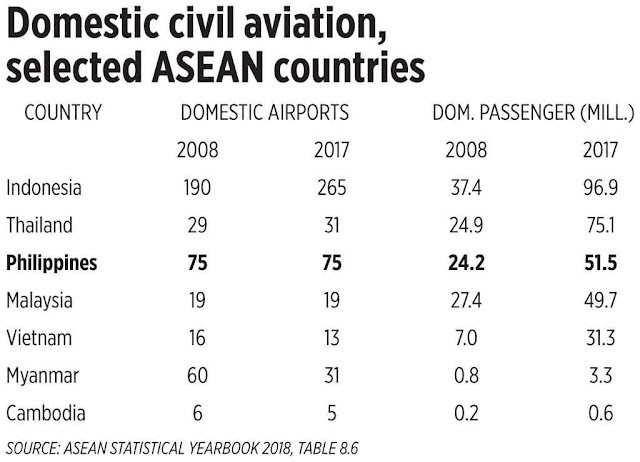 To further promote the Philippines’ domestic and international tourism, and in the process further expand our GDP size, we need further airlines liberalization, further expansion of existing provincial airports, and further improvement of roads, seaports, energy and other physical infrastructures to serve the many resorts and hotels in many provinces and islands of the country.

There is only one week left in the current Congress that will have sessions until June 7, 2019. The Senate and then the bicameral committee should pass the PSA Amendment bills into law. This should be among the important laws that the Duterte administration can do for the consumers, passengers, visitors and investors.
-----------------