Four reports in BusinessWorld last week seem to show a confusing investment environment of the Philippines:

So actual foreign direct investment (FDI) in early 2019 has fallen while pledges of FDIs at the Board of Investments (BoI) were up.

I checked the United Nations Conference on Trade and Development (UNCTAD) World Investment Report (WIR) 2019 to see trends in FDI inflows. The following trends are emerging over the past five years: (a) Global FDIs are declining; (b) FDIs in China, HK, and Singapore are flatlining; (c) FDIs in Vietnam, Thailand, Taiwan, Myanmar, Cambodia, Laos are rising; (d) FDIs in the Philippines are up-and-down (see table). 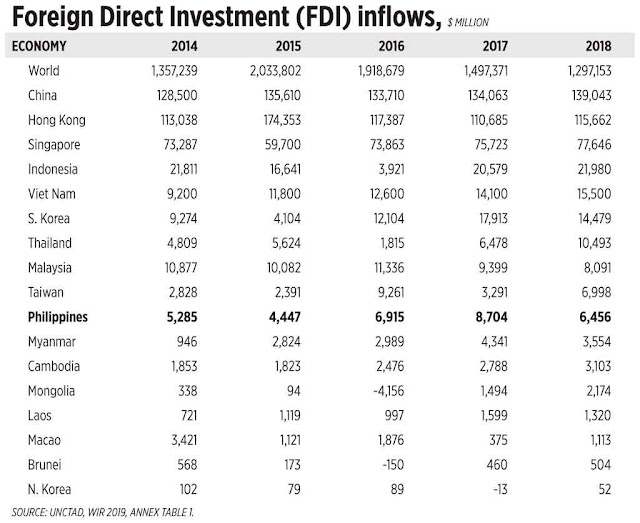 Japan, S. Korea, and Taiwan are sources or origins of FDIs, not destinations of FDIs. The Philippines is still far from becoming a net exporter of FDI.

During the UP School of Economics Alumni Association (UPSEAA) lecture held on June 14 at the Ark by UnionBank, InLife building, on Ayala Avenue, the lone speaker was Department of Trade and Industry (DTI) Secretary Ramon Lopez, himself a fellow alumnus. Sec. Lopez mentioned that among the promising areas for FDIs and top 12 investment priorities in the Philippines is the shipbuilding and ship repair (SBSR) sub-sector. His data showed that we are currently the 5th largest ship producer in the world based on gross tons, with nearly 2 million tons built in 2017. There are also 119 shipyards nationwide. As a regular passenger of roll-on roll-off (RoRo) boats in my annual local travels to Mindoro and Panay, Negros islands, this is good news to me. More big and modern boats, more competing shipping lines, more options for passengers.

Another report in BusinessWorld titled “Japanese businesses cite martial law, lack of direct flights as main Mindanao issues” (June 13) corroborates this necessity. Some Japanese investors want to develop a flower farm in Mindanao and transport the flowers, some of which are “very expensive,” to Japan but there are not enough airlines that serve this route.

The market-oriented reforms for efficiency (MORE) that the incoming Congress this July should prioritize are PSA, FIA, and FINL liberalization and related measures. These will greatly help address the investment gap, which will create more jobs and expand more choices in services for passengers and consumers.
----------------