BWorld 336, Inflation target below 2% is possible 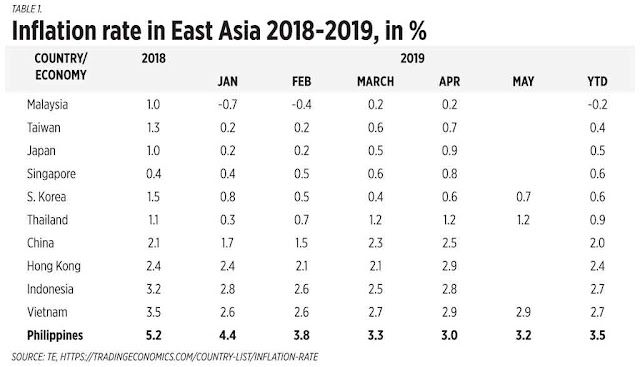 Dutertenomics will still not admit that their multiple tax hikes (especially oil taxes) under TRAIN law is responsible for the continuing price hike penalties on Philippine consumers.

The government also boasted recently that after Moody’s BBB+ stable ratings upgrade, Fitch recently affirmed its BBB stable ratings. Which implies that their macroeconomic management of the country is good and wise.

Not so fast. Take these two recent stories in BusinessWorld and I quote portions of the report:
(1) “Fitch Ratings cuts PHL growth forecast on budget delay” (April 25, 2019)

“Fitch Ratings — which in December affirmed the Philippines credit rating at “BBB,” a notch above minimum investment grade, with a “stable” outlook — slashed its economic growth forecast for the Philippines to 6.2% for this year from the 6.6% projection it gave in December…”

“…it is probable that they will not be able to fully execute the budget amount, so I think that’s the part of the reason why we think there’s still going to be a deceleration in growth versus 2018,” Mr. De Guzman said.”

On the credit ratings, the Philippines experienced mediocre if not negative outlooks under the Estrada and Arroyo administrations, then things improved to upgrades of BB+ and BBB- under the Aquino administration. So the Duterte administration simply inherited the momentum from its predecessor (see table 2). 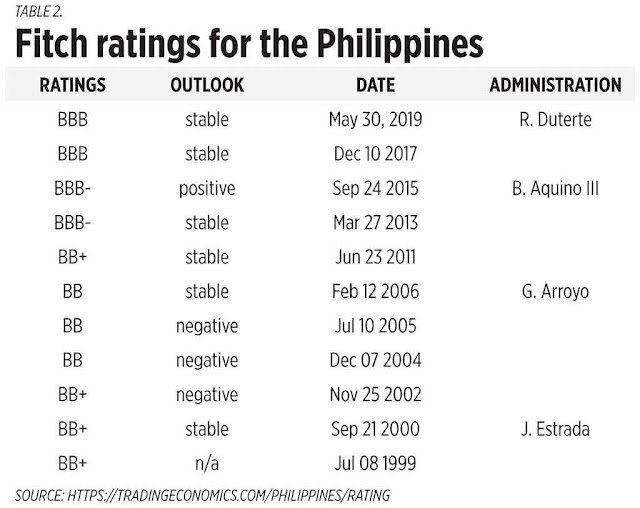 Dutertenomics has a chance to significantly bring down the country’s inflation rate to 2% or lower in the latter half of the year by legislating tax cut somewhere. That measure should include a VAT cut from 12% to 10%, better if 8% in exchange for drastic reduction in exempted sectors.

VAT is anti-poor, anti-rich, anti-consumers and only pro-government. Poor farmers and fisherfolks, poor urban workers and students use commodities that are slapped with 12% VAT — like oil and spare parts for their tractors and pumpboats, motorcycles and tricycles, jeepneys and buses.


The various tax hikes under TRAIN law to “compensate” personal income tax cut was wrong. It has resulted in making the Philippines the inflation valedictorian of the region. This mistake should be corrected by having a VAT cut, which will significantly reduce price pressure on the consumers.
---------------