Two University of Turku (Finland) physicists have determined a) the climate’s sensitivity to a doubling of CO2 is 0.24°C, b) the human contribution to the warming of the past century is only about 0.01°C, c) the IPCC and climate modeling dramatically overestimate CO2’s climate impact, and d) variations in low cloud cover control the climate…. 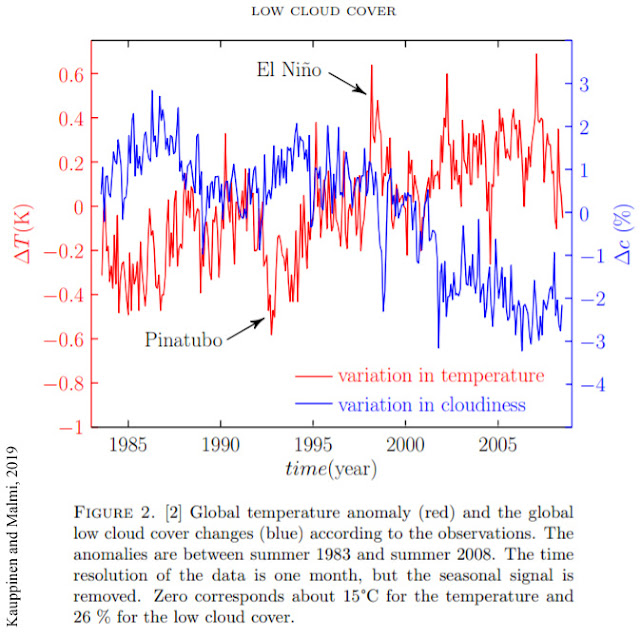 In this manner, Kauppien and Malmi (2019) find “low clouds practically control the global temperature,” which leaves “no room for the contribution of greenhouse gases i.e. anthropogenic forcing.”

“During the last hundred years the temperature increased about 0.1°C because of carbon dioxide. The human contribution was about 0.01°C”, the Finnish researchers bluntly state in one among a series of papers.

This has been collaborated by a team at Kobe University in Japan, which has furthered the Finnish researchers' theory: "New evidence suggests that high-energy particles from space known as galactic cosmic rays affect the Earth's climate by increasing cloud cover, causing an 'umbrella effect'," the just published study has found, a summary of which has been released in the journal Science Daily.

Conclusions from the Finnish studies:

“During the last hundred years the temperature increased about 0.1°C because of carbon dioxide. The human contribution was about 0.01°C.”

“Because the anthropogenic portion in the increased carbon dioxide is less than 10 percent, we have practically no anthropogenic climate change,” the researchers concluded.

“Man-made-global-warming believers will by 2021 have to admit they were wrong and that CO2 is blameless and that Svensmark’s sun/cosmic ray/cloud/temperature link is correct.”

Galactic Cosmic Rays are a mixture of high-energy photons and sub-atomic particles accelerated toward Earth by supernova explosions and other violent events in the cosmos. Solar Cosmic Rays are the same, though their source is the sun.

Both Galactic and Solar Cosmic rays hitting Earth’s atmosphere create aerosols which, in turn, seed clouds (Svensmark et al) — making them an important player in our weather and climate.

During solar minimum, like the one we’re entering now, the sun’s magnetic field weakens and the outward pressure of the solar wind decreases.

This allows more cosmic rays from deep space to penetrate our planet’s atmosphere:

(5) Reducing the future to climate: a story of climate determinism and reductionism.
charles the moderator / July 9, 2019
https://wattsupwiththat.com/2019/07/09/reducing-the-future-to-climate-a-story-of-climate-determinism-and-reductionism/