Climate Tricks 78, Catastrophe... Not, since 19 years ago 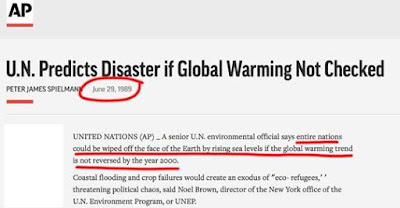 In June 1989, the UN has warned humanity that there would be global disaster, "entire nations could be wiped off the face of the earth by rising sea levels by the year 2000." Or 19 years ago, wow. So most of us now could be zoombies pretending like normal people roaming around the planet? See the story here,
https://wattsupwiththat.com/2019/03/03/icymi-the-u-n-told-us-wed-have-disaster-by-year-2000-if-global-warming-was-not-checked/

Then Peter Wallace of The Wallace Business Forum wrote one of his climate alarmist articles, and he warned "it wouldn’t take much to wipe us out as a race."

I wrote to Peter saying that those are ALL false claims, all fake news, all alarmist stories. And he seems to be parroting the alarmism. Their goal is to have more, bigger government, bigger UN, bigger carbon taxes and regulations.

See here stories of "last chance to save the planet" since 1992 or 27 years ago. And news reports in 2007 citing scientists saying that Arctic summer would be ice-free already by 2013 or six years ago. https://www.bworldonline.com/chr-investigates-carbon-majors-by-using-more-fossil-fuels/


All those thick snow and ice from the Arctic to US mainland until few weeks ago were fake? They were 'warm ice'?

(1) "CO2 emissions doesn’t seem to bother Trump. Where does he think all that pollution goes?" -- Peter Wallace.

(2)"Stop cutting down trees, plant them."

Because Peter thinks that CO2 is a bad, pollutant gas and not a useful gas, he is not aware, or does not believe, that more C02 = more trees, more green planet. Little need to use huge taxpayers money for endless tree planting because trees regenerate on their own fast.
https://www.nasa.gov/feature/goddard/2016/carbon-dioxide-fertilization-greening-earth/

The "expensive energy (oil, lpg, coal) is beautiful" philosophy under the TRAIN law is partly inspired by climate alarmism. Oil, coal, lpg are fossil fuels that ‘warm the planet’, so government should make them expensive via higher taxes to reduce their use by the people. But see the result – expensive lpg forces many poor households to shift back to using firewood and charcoal, and this results in more cutting of trees in public forest land. Cheap LPG actually helps conserve the forest because demand for charcoal and firewood declines. Firewood gatherers have little incentives to cut down many trees illegally because demand for firewood/charcoal is low and the price is low.

Flooding also happens in parts of Baguio city that is more than 4,000 feet asl. Flooding happens in many cities, coastal or mountainous, esp when natural water catchments, low lying areas, were colonized by new houses, buildings, covered with soil then structures are put up. Zero relations with 'rising sea level."