Starting this week, this column will produce a series of Market-Oriented Reforms for Efficiency (MORE) articles related to recently enacted laws and proposed legislations in the Philippines on various sectors. Thus, recent Republic Acts (RA) and some pending bills for bicameral committee meetings after the May 2019 elections will be discussed.

These non-attractive fiscal policies plus the Constitution restrictions on foreign investments, among others, contribute to the Philippines having the lowest foreign direct investments (FDI) stock among more mature economies in the region (see table 1). 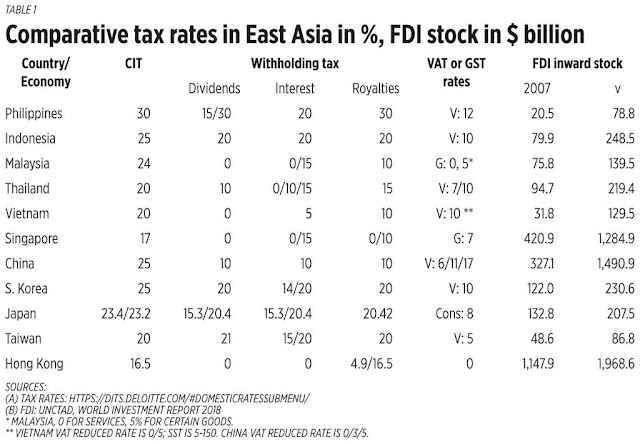 The main bill under deliberation is HB 8083, the “Tax Reform for Attracting Better and High-Quality Opportunities” or TRABAHO bill. Originally it was called the “TRAIN 2” bill but with the generally adverse impact of the TRAIN law of 2017, the DOF changed its moniker to TRABAHO.

The Senate version intends to cut CIT from 30% to 25% in year 1 of implementation and not staggered to 10 years.

TRABAHO bill has been passed on third reading in the House last September 2018, awaiting action from the Senate for a possible bicameral meeting in late May this year.

If the government is sincere in really attracting more local and foreign investments, it should either (a) cut CIT to low, flat 15-16% within year 1 of implementation and abolish the GIE, or (b) cut CIT to 21-25% and raise the GIE to 7%. 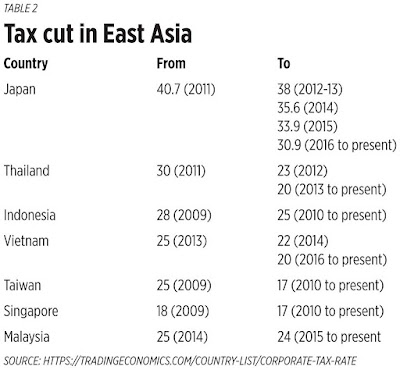 Let us hope that when Senators and Congressmen/women meet for a bicameral meeting after the May elections, or when they refile the bill in the next Congress in July, they will be more aware that capital and people are more mobile these days. Both the national and local governments should not be too tax-hungry and reducing the tax rates, lowering the number of permits and payments, will greatly help in attracting both local and foreign investments, and retaining them for the long-haul.
---------------