On murders and genocide, Muslims or Christians

Murder of one person already terrifies me. Murder of 49 in NZ is sickening. Genocide of 6,000+ is pure evil.

“Church leaders in Nigeria have said that Christians are experiencing "pure genocide" as 6,000 people, mostly women and children, have been murdered by Fulani radicals since January.

"What is happening in Plateau state and other select states in Nigeria is pure genocide and must be stopped immediately," said the Christian Association of Nigeria and church denominational heads in Plateau State in a press release last week.”

My friend Jayant Bhandari made this observation when he posted that story in his fb page,

“No one cares when Third World people kill each other. On any day 10 times or more Muslims are killed by other Muslims. It is only when Muslims are killed in the West, it becomes an opportunity for virtue-signalers to come out of the woodwork, and for Muslims to feel horrified--and these Muslims completely fail to see outpouring of sympathy the victims get in the West. Anyone who does not puke watching this disgusting show of irrationality has a serious problem. And the NZ PM covered her head today. Why? I am starting to wonder if women are so protected at home that they have no balanced understanding of reality?”

Why Does The Mainstream Media Purposely Ignore Mass Killings Of Christians Across The Globe?
by Tyler Durden Mon, 03/18/2019 - 23:00
https://www.zerohedge.com/news/2019-03-18/why-does-mainstream-media-purposely-ignore-mass-killings-christians-across-globe 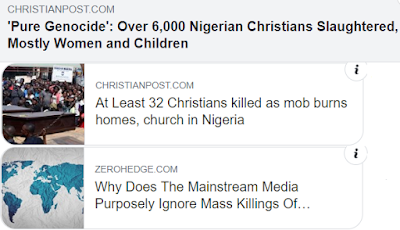 
"So far in 2019, there have been 453 Islamic terror attacks in which 1,956 people have been murdered.  But you will never hear those numbers from the mainstream media.
Instead, when the mainstream media talks about Bible-believing Christians it is almost always an attack story.  As a recent Breitbart article aptly observed, having “an anti-Christian bias” has become “the last acceptable prejudice”…"

Murder is reprehensible, much more with genocide. Going back to the classical 'social contract' theory why government is created, the main purpose of having government is to protect the people's basic freedom and rights -- right to life (vs murderers), right to private property (vs thieves), right to liberty and expression (vs bullies, dictators). Government failure in any of these three basic functions would guaranty government failure in any of its expanded roles and interventions in society.
Posted by Bienvenido Oplas Jr at 12:15 AM