* This is my article in BusinessWorld last Tuesday, March 26.

The Market-Oriented Reforms for Efficiency (MORE) series continues and tackles the air transportation sector. For an archipelago of more than 7,500 islands and about 20 are big islands with big populations, and air travel is necessary to hasten the movement of people and goods.

For the Philippines, the good news is that from mere trickles of less than nine million local and foreign passengers transported in the past four decades (1986, 1996, 2006 data), things have significantly improved starting 2010 (global recovery from financial turmoil of 2008-09, then change of administration from Gloria Arroyo to Benigno Aquino III). That year, passengers jumped to 22.6 million, then 35 million in 2014 and 40 million in 2016.

The bad news is that compared to our neighbors in East Asia, we are not dynamic and liberal enough to allow more airline competitors, and/or we do not have more big airports, including budget terminals, to fly more passengers. Several neighbors with smaller populations than us — Hong Kong, Malaysia, Thailand, S. Korea — have more air passengers than the Philippines (see table). 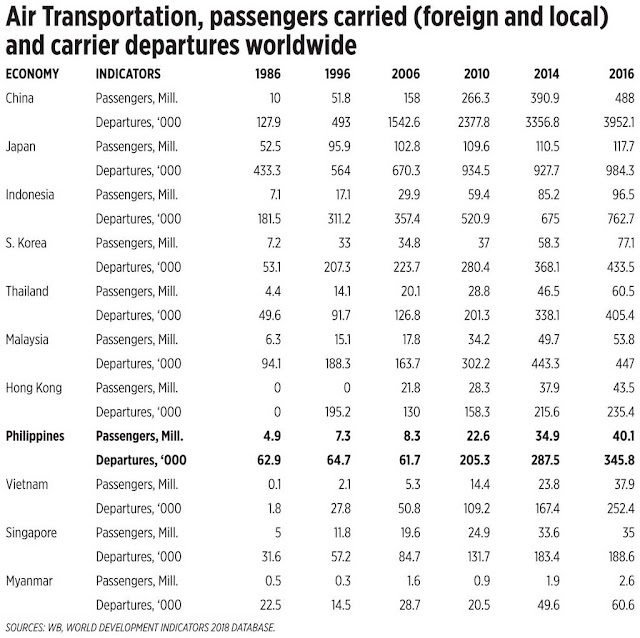 Note that of the Philippines’ 40 million passengers in 2016, only six million were international visitors (corresponding to 6 million foreign arrivals,) so some 34 million or 85% were domestic passengers.

We need to further liberalize airline competition in the country. We also need to expand physical infrastructures like bigger and more provincial airports, have more budget terminals, more toll roads that link the airports to big city centers and major tourist destinations.

These will have a combined effect of attracting more local and foreign fliers, and of hastening commerce, tourism, investments, job creation, business expansion and economic growth in the country.
-----------------