Continuing the Market-Oriented Reforms for Efficiency (MORE) series in this column, we tackle the importance of more electricity production in the development of Asia-Pacific economies.

First, the Association of the Electricity Supply Industry of East Asia and Western Pacific (AESIEAP) in September 2019 in Shangrila Mactan, Cebu; second, the Conference of Electric Power Supply Industry (CEPSI) at the Philippine International Convention Center (PICC) in November 2020.

During the open forum, I commented that the Philippines holding these two big energy events that are technology-neutral on energy sources is important, to contrast with the renewable energy (RE) favoritism of the Asian Development Bank’s Asia Clean Energy Forum (ACEF). The latter is an annual event glamorizing the role of wind-solar and other renewables while implicitly demonizing the role of fossil fuels in energy development in Asia. Their delegates, speakers, and sponsors fly from all over the world on fossil fuel then directly or indirectly lambast fossil fuel and talk of a “decarbonized world” via RE favoritism and cronyism.

Having a technology-neutral energy policy is important for fast economic growth and expansion of Asian economies. For instance, despite the decades-long lobby to glamorize and subsidize wind-solar and other renewables, fossil fuels provided 74% of total electricity generation in Asia-Pacific in 2017, with many countries being more than 80% fossil fuels-dependent — India, Australia, Indonesia, Malaysia, Thailand, Taiwan, etc. (see table 1). 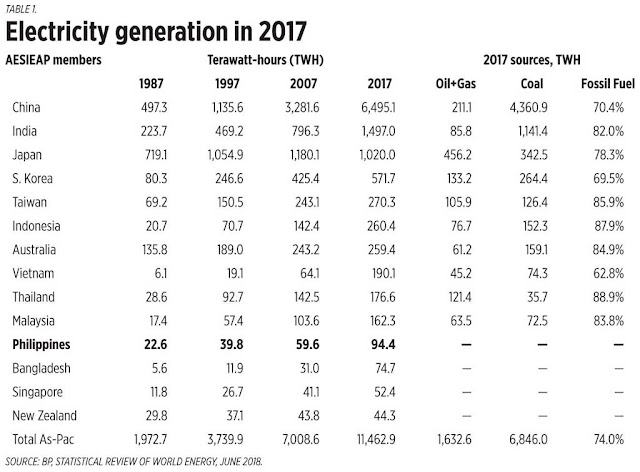 High power generation coincides or correlates with high economic expansion. The numbers are shown below spanning 30 years from 1987 to 2017. High correlation is shown in some countries like S. Korea, Indonesia, Malaysia, India, Taiwan, Thailand, and Bangladesh (see table 2). 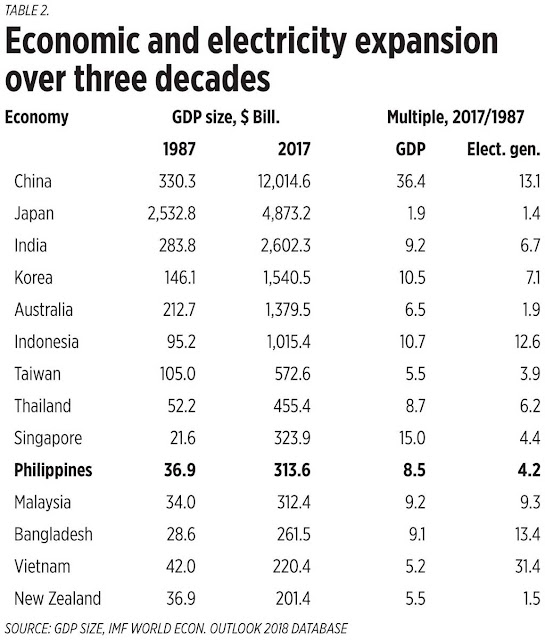 As shown in table 1, the Philippines still has small power generation despite its huge population of 108 million (two times that of S. Korea, four times that of Australia). We need more investments in the sector — in generation, transmission, distribution, and supply.

Energy efficiency as “substitute” for more power generation is not enough. If one will drive at night in many provinces, one will notice that national and provincial roads are dark and conducive to accidents, except in some city centers.

In many instances, government taxes, permits and bureaucracies, plus occasional price control (like the Wholesale Electricity Spot Market price cap), are among the hindrances to more energy development. Government should learn to step back on these.
----------------