The socialists, Oxfam and other organizations, leaders are salivating at their endless plan to go after these wealth and money via more taxation.

Here are the top billionaires and Forbes' brief description of their businesses.

Founded e-commerce colossus Amazon in 1994 out of his garage in Seattle. He remains CEO and owns a 16% stake.
In 2018, Amazon pulled in $230 billion in revenues and a record $10 billion in net profit, up from $3 billion the prior year.
In February, Amazon announced it was canceling plans for a second headquarters in Long Island City, New York after local lawmakers opposed the plan.
Bezos owns The Washington Post and Blue Origin, an aerospace company that is developing a rocket for commercial use.

With his wife Melinda, Bill Gates chairs the Bill & Melinda Gates Foundation, the world's largest private charitable foundation.
The foundation works to save lives and improve global health, and is working with Rotary International to eliminate polio.
Gates has sold or given away much of his stake in Microsoft -- he owns just over 1% of shares --and invested in a mix of stocks and other assets.
He remains a board member of Microsoft, the software firm he founded with Paul Allen in 1975.
In late 2016, Gates announced the launch of a $1 billion Breakthrough Energy investment fund with about 20 other people.
To date, Gates has donated $35.8 billion worth of Microsoft stock to the Gates Foundation.

Buffett runs Berkshire Hathaway, which owns more than 60 companies, including insurer Geico, battery maker Duracell and restaurant chain Dairy Queen.
The son of a U.S. congressman, he first bought stock at age 11 and first filed taxes at age 13.
He's promised to give away over 99% of his fortune. In 2018 he donated $3.4 billion, much of it to the foundation of friends Bill and Melinda Gates.
In 2010, he and Gates launched the Giving Pledge, asking billionaires to commit to donating half their wealth to charitable causes.

Bernard Arnault oversees an empire of 70 brands including Louis Vuitton and Sephora.
His luxury goods group, LVMH, posted record sales and profits in 2018, thanks in part to increased spending by Chinese customers.
His daughter Delphine is executive vice president of Louis Vuitton, and a member of LVMH's executive committee.
His father made a small fortune in construction; Arnault put up $15 million from that business to buy Christian Dior in 1985.

One of the richest men in Europe and the wealthiest retailer in the world.
A pioneer in fast fashion, he cofounded Inditex, known for its Zara fashion chain, with his ex-wife Rosalia Mera (d. 2013) in 1975.
He owns about 60% of Madrid-listed Inditex, which has 8 brands, including Massimo Dutti and Pull & Bear, and 7,500 stores around the world.
Ortega typically earns more than $400 million in dividends a year.
He has invested his dividends primarily into real estate in Madrid, Barcelona, London, Chicago, Miami and New York.

Cofounded software firm Oracle in 1977 to tap into the growing need for customer relationship management databases.
He gave up the Oracle CEO role in 2014 but still serves as chairman of the board and chief technology officer.
As part of Oracle's push into cloud computing, it acquired cloud-software firm Netsuite for $9.3 billion in 2016.
In May 2016, Ellison pledged $200 million to the University of Southern California for a cancer treatment center.
In March 2018, Ellison launched a wellness startup called Sensei, whose first project is hydroponic farming on the Hawaiian island Lanai.
Ellison joined Tesla's board in December 2018, after purchasing 3 million Tesla shares earlier that year.

After facing another year of criticism for fake news and abuse on Facebook, CEO Mark Zuckerberg said his priority in 2019 is tackling social issues.
In April 2018, he testified before Congress after it was revealed that Facebook shared users' data with political consulting firm Cambridge Analytica.
Zuckerberg started Facebook at Harvard in 2004 at the age of 19 for students to match names with faces in class.
He took Facebook public in May 2012 and still owns nearly 17% of the stock.
In December 2015, Zuckerberg and his wife, Priscilla Chan, pledged to give away 99% of their Facebook stake over their lifetimes.

Cofounded financial information and media company Bloomberg LP in 1981.
He put in the seed funding for the company and now owns 88% of the business, which has revenues north of $9 billion.
Bloomberg got his start on Wall Street in 1966 with an entry level job at investment bank Salomon Brothers. He was fired 15 years later.
An active philanthropist, he has donated more than $5 billion to gun control, climate change and other causes.
He plans to spend at least $500 million to defeat Donald Trump in 2020.

Sits at the helm of Alphabet, the parent company of Google, healthcare division Calico, smart home appliance division Nest and more.
He cofounded Google in 1998 with fellow Stanford Ph.D. student Sergey Brin.
With Brin, Page invented Google's PageRank algorithm, which powers the search engine.
Page was Google's first CEO until 2001. After serving as president of products, he took the CEO job again in 2011.

For the Philippines, here are the wealthiest individuals and families, 2019 list. 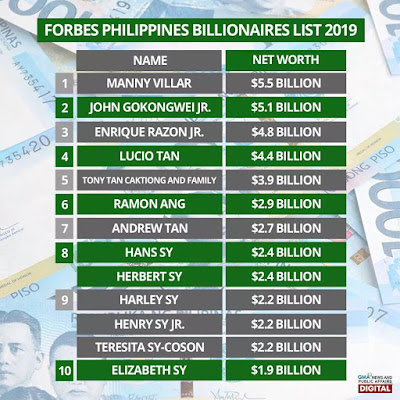 Oxfam and other emotionalists would complain endlessly why there are many billionaires when so many people are poor. The poor will become middle class or become rich if those billionaires and their products and services -- like google, blogger, facebook, youtube, iphone, etc -- don't exist? Lousy minds those emotionalists.
------------------