Going through the Economy section of BusinessWorld last week, I checked these four energy-related reports:

Report #1 refers to low reserves on March 5 of only 624 MW, available capacity was only 10,115 MW due to unscheduled shutdowns by some (aging?) power plants while peak demand hit 9,491 MW.

Report #4 is about HB 6276 and SB 2098 penalizing the construction of structures that interfere with power transmission.

On report #1, it is ironic that government targets fast GDP growth of 7-8% and yet we still experience occasional near-deficiency in power during the hot months of March to May. It is not possible to have sustained fast growth if there is insufficient and limited supply of stable electricity.

From 2000 to 2017 or in just 17 years, the expansion in electricity generation in terawatt hours (TWH) and GDP size are as follows: China, 4.8x and 9.9x; Indonesia, 2.8x and 5.7x; Vietnam, 7.2x and 7.1x; Philippines, 2.1x and 3.9x. Philippines’ power generation is small (see table), there is no valid reason why certain groups would oppose fast expansion of the country’s power generation capacity if the power source is against their ideological beliefs. 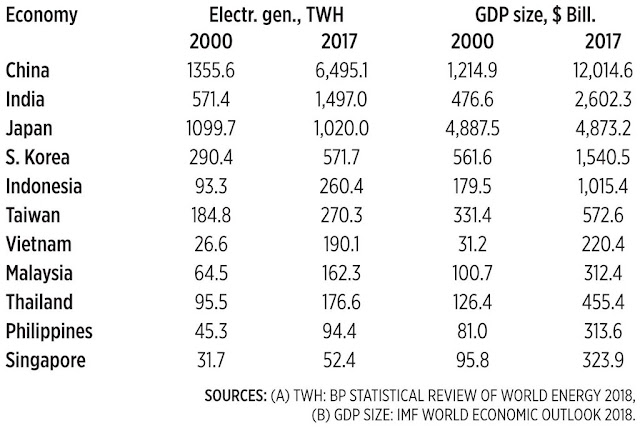 On report #2, under SB 1590, SCC refers to the excess of the contracted IPP costs and the actual selling price, SD is any unpaid financial obligation of Napocor. The good news is that the bill will reduce power prices for the consumers as the universal charge in our monthly electricity bill will significantly decline if not be erased. The bad news is that the SCC and SD of Napocor/PSALM will keep rising because PSALM will keep subsidizing the cost of its contracted energy by selling low and buying high and still look “financially healthy.”

The Implementing Rules and Regulations (IRR) should put a cap on the amount of SCC and SD to avoid endless, bottomless complacency by NPC/PSALM. Over the long-term, these government corporations should (a) learn to sell power rates at true costs, and (b) fade away as there are many government agencies that regulate private generating companies (DOE, ERC, SEC, BIR, LGUs…).

On report #3, there is a draft substitute HB on “Downstream Natural Gas Industry Development Act” with some lousy, anti-consumer provisions. For instance in Chapter IX (Incentives), Section 34 (Natural Gas Portfolio Standards), it mandates that “all distribution utilities shall be required to allocate ten percent (10%) of its electricity capacity from natural gas.”

Proponents and lobbyists of this bill or section intend to rob Philippine electricity customers. Even if they price their natgas to high levels, DUs and customers have no choice since they are coerced to buy minimum amount of natgas power. If the claim by one big natgas company that “natgas is cheap and competitive compared to coal” is true, then there is no need for this bill. That claim therefore is a lie, hence a need for legislation to arm-twist DUs and customers nationwide.

Related to report #4 is the Energy Virtual One Stop Shop (EVOSS) under SB 1439 and HB 8417. The bicameral meeting was finished and the bill may have been signed by President Duterte already. It is among the very few laws to reduce red tape by bureaucrats. For instance, Section 13 states: “Failure of the mother agency and its attached bureaus, offices and agencies both on the national and local level, including GOCCs, to release its action on applications duly filed with complete supporting documents within the prescribed time frame shall be deemed approved for such application…”

The IRR will soon be issued, the reform should cover all power gencos with no exception and favoritism.

The Arangkada Philippines Project (TAPP) document on Power made Recommendation #15, “new generators to enter the market with plants that are profitable at a much lower cost per kWh, creating an abundant supply of baseload.” Amen.
----------------