“Socialist governments make a financial mess. They always run out of other people’s money. They then start to nationalise everything, try to control everything by other means.”

MODERN day socialists and populists in governments, explicit and implicit, are aware of the limits of governments giving all sorts of endless, no timetable subsidies, discounts and other welfarist programs. So they invented a new form of welfarism — forcing private corporations to give mandatory discounts (restaurant food, medicines, fare in public transportation, etc.) to people, rich and poor no distinction. Politicians and governments get the credit while corporations get the financial burden as those forced discounts cannot be used for tax deduction.

There are two existing laws that force and coerce private corporations to give mandatory 20% discounts on fare, medicines, all-year round: (1) RA 9994 “Expanded Senior Citizens Act of 2010,” and (2) RA 9442 (2007) “Amending RA 7277 ‘Magna Carta for Disabled Persons.’” Both laws do not allow the fare discounts, medicines discounts, food discounts, etc. for tax deduction. Only the private corporations will shoulder the full cost in the form of lower revenues.

Now there are bills in Congress, House Bill (HB) 8885 and Senate Bill (SB) 1597 “Student Fare Discount Act,” both passed on third reading, forcing all public transportation operators to give all Filipino students from elementary to tertiary, technical and vocational, a 20% mandatory discount all-year round including weekends and holidays, and covers all means of transportation — buses, jeepneys, tricycles, taxi, TNVS, TNCs, trains, airplanes and passenger ships.

HB 8885 has two compensatory and relief provisions for public transportation operators: (1) tax deduction from gross income for the same taxable year, and (2) reduction or exemption from some regulatory fees and charges. SB 1597 has none.

A bicameral committee meeting will be set after the May elections and guess what bill will prevail when the DoF comes in? Very likely the Senate version because the DoF just wants tax-tax-tax and dislikes tax deductions.

Fare control and price control without tax deduction are wrong and socialistic because they distort pricing by private enterprises. In the case of mandatory fare discounts say for airlines, poor students may travel and avail the discount only once or twice a year. Rich students (and senior citizens) can travel 10, 20 times a year or more and avail more discounts while earning more air mileage.

The price distortion can be represented by the graph here. If there are no laws on mandatory and forced discounts, the equilibrium price or fare will be at point A and buslines, taxis, airlines, shipping lines can make money subject to competition.

With mandatory 20% discount, the demand curve shifts to the right, there will be more travels by students, senior citizens and persons with disabilities (PWDs) as their fare goes down to point B. Some or many transportation companies will risk going bankrupt if they will endure this, so they have to raise the price for the regular passengers to point C so that the composite or weighted average fare can go back to point A. 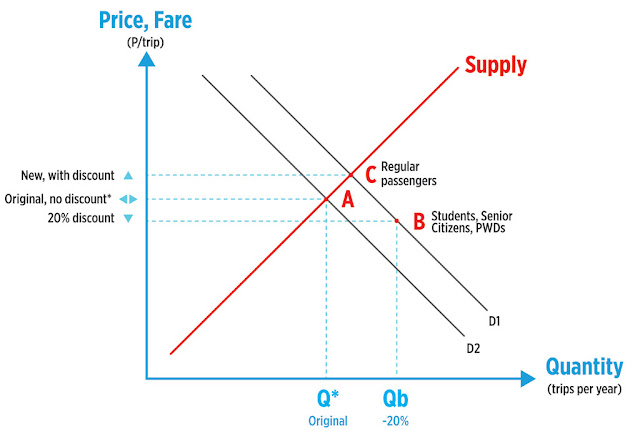 So the mandatory price discount has created a new inflationary pressure, higher prices and fares for non-students, non-senior citizens and non-PWDs.

Mandatory discount is fare control, price control and profit control. The government wants to control how much revenues the corporations can make. Private enterprises adjust and raise the price for everyone else.

A good way to avoid this price distortion is to junk these two bills but this is impossible now because they have been passed on third reading. A compromise is to adopt the House version, the cost of all student fare discounts will be credited for tax deductions and reductions of other regulatory fees and charges.


In case DoF will prevail and the Senate version will be adopted, then ordinary passengers will endure the cost of higher fares and they can demonize the DoF for causing another round of consumer inflation via higher fares — in buses, taxis, TNVS, airlines, shipping lines.
----------------