The cronyist “Solar para sa Bayan Corporation” (SPBC) franchise bill (HB 8179) was magically passed by the House of Representatives despite opposition by many groups in the energy sector. Among the oppositors is the Developers of Renewable Energy for AdvanceMent, Inc. (DREAM), the umbrella organization of all RE associations in the Philippines.

As I did in my letter to Sen. Grace Poe, arguing for the junking of HB 8179, DREAM said the bill is unconstitutional and should not be passed. In particular, (1) it violates the equal protection clause under Article III, Section 1 of the 1987 Constitution. The proposed SPBC franchise has no substantial distinction with other generators that will not be granted a similar franchise. (2) It violates the fundamental right to due process of law under the Constitution. And (3) it violates the proscription against unfair competition.

Nonetheless, a Senate Committee Report 659 was passed last week, February 7, 2019, and some outlandish provisions from the original bill have been tamed. Among the changes is that the operational coverage “in any… areas throughout the Philippines” has been limited to only 13 provinces.

Note three things here: (1) SPBC claims it is competitive yet it requires a Congressional franchise and a franchise by nature is a monopoly, (2) EPIRA law of 2001 has unbundled energy components and players are classified as transmission, generation, distribution, supply companies; SPBC is a generation, distribution and supply company rolled into one, and (3) first time that a franchise will have implementing rules and regulations (IRR).

BusinessWorld reported (“Court challenge looms for Solar Para Sa Bayan franchise,” February 08, 2019) that the Coalition for Rural Electrification (CoRE) warned that such a franchise bill may not hold up to a court challenge. Good. It is shameless that this bill was rushed at the House and the Senate where a member is the mother of the company owner as we all know. If it becomes law, the measure should be called as Solar para sa Pulitika Corp.

Meanwhile, on another front, there is a last-minute lobby by various protectionist groups who insist that expensive rice is good for the country and the poor. They oppose SB 1998 or the Rice Tariffication bill, removing quantitative restrictions (QR) and replacing it with a 35% tariff rate on imported rice from ASEAN, and 40% or higher on imported rice outside of ASEAN.

The protectionists’ main argument is that rice liberalization will lead to the demise of the local rice industry as there will be a huge influx of imported rice from our neighbors.

This is outright disinformation, deception and lie. Even if we wanted to import one-half or even one-fourth of our domestic rice consumption, it is not possible, it is not going to happen.

Data from the UN Food and Agriculture Organization (FAO) show that Philippine rice production has been steadily rising and the average productivity per hectare has also been rising, from only 2.2 tons per hectare in 1980 to 4.0 in 2017.

The two big rice exporters in the world, Thailand and Vietnam, have actually experienced a declining or low expansion in rice output. Thailand’s output declined from 35.7 M tons in 2010 to 33.4 M tons in 2017. Over the same period, Vietnam’s output increased a little from 40 to 42.8 M tons.

Myanmar and Cambodia can be the next group of rice exporters but they also have a rising demand and population (see table). 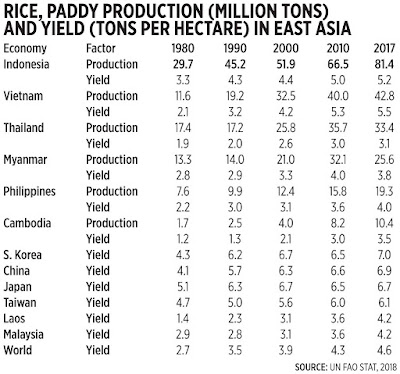 So the Philippines’ rice importation will be limited and restricted even if it wants to import more and there will be no such demise in the local rice industry. Rice trade liberalization should proceed, and NFA’s distortionist monopoly of power to regulate rice imports should be removed.


The 35% tariff is actually high. Why should a P30/kilo potential landed price of rice from ASEAN neighbors be made P40.50/kilo to many poor Philippine households? That 35% should go down through time, down to zero for rice imports from ASEAN.
----------------