Trump-Kim 2, the second summit in Vietnam

Vietnam as venue of the second Trump-Kim summit next week is perfect, good model for N.Korea transition: (1) VN is politically socialist but economically capitalist, (2) VN has no nukes yet politically secure, (3) VN was a former US enemy and later embraced the US as economic and military partner, (4) VN is an ASEAN member, the association is 3rd biggest consumer bloc in the world (about 650 M consumers) with many friends all over the world.

Go Mr. Kim, you may remain politically socialist but embrace capitalism and globalization, embrace America and its huge entrepreneurial talent and resources. No more nukes, more billions of $ of commerce instead. 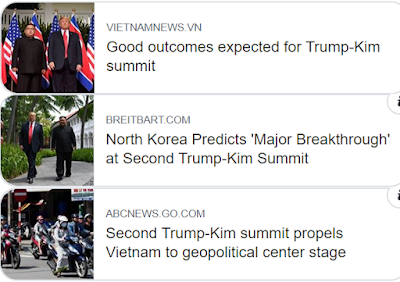 “Kim will reportedly arrive for the summit early, on February 25, for scheduled talks with Vietnamese officials. Vietnam is a communist country but maintains friendly relations with the United States and has managed to sustain a functional economy, something that has eluded North Korea for decades. Kim’s visit will be the first by a North Korean communist dictator since grandfather Kim Il-song visited in 1964.”

“But the focus of Kim’s trip would likely be the economy. Vietnam’s reforms, which have propelled it to become of one of the fast-growing economies in the world, have been widely touted as a road map for the impoverished hermit kingdom to follow.”

"The United States and Vietnam normalized ties in 1995, decades after the end of the Vietnam War. Over the ensuing quarter century, their economic and trade relations have grown stronger. From 1995 to 2016, bilateral trade grew from $451 million to nearly $52 billion, according to the State Department.

President Barack Obama visited Vietnam in 2016 and Trump attended an international summit there in 2017. Vietnam’s Prime Minister Nguyen Xuan Phuc visited the White House in 2017, too."

"Both Trump and Kim, whose regime has been locked in hostilities with the U.S. for almost 70 years, have intense security demands. Vietnam has been building military ties with the U.S. to balance a rising China and -- like Singapore, the host of the first Trump-Kim summit in June -- is among four dozen countries with a North Korean embassy. Moreover, Kim, who must rely on Chinese loaner aircraft and aging Russian-built passenger jets, can reach the communist country by flying over friendly territory."

“Nearly 3,000 journalists are expected to descend on Hà Nội next week for the biggest political event of the year…
It’s only the second time the political heavyweights have ever met, but analysts predict this meeting has more significance than last year’s summit in Singapore.”
Note also that the two Trump-Kim summit are held in the ASEAN, SG last June and VN this month. So a NKorea-ASEAN FTA will not be far fetched.
This will be a new growth opportunities in East Asia, no doubt. N. Korea has about 26 M people and consumers, and S. Korea (51 M consumers) can then reduce its defense spending and use more public resources for N. Korea industrialization and development.
----------------