Last week February 06, I posted this note in my fb wall then tag several friends active in the tax hikes campaign:

Tony said that they want total ban for tobacco but there is need to convince the Northern Luzon bloc to stop producing tobacco. I asked, why not say and advocate that? We have laws on ban prostitution, ban illegal drugs, ban illegal gambling, why not call for a law to ban tobacco? They  cannot advocate ban tobacco precisely because they want more tobacco taxes, billions of pesos yearly. There is double talk in the advocacy.

“(In 2018) The interagency National Committee on Intellectual Property Rights (NCIPR) seized a total of P23.6 billion worth of fake goods, much higher than the 2017 level of P8.2 billion… cigarettes accounted for 85.81% of the value or P20.25 billion… IPOPHL Director General Josephine R. Santiago said that the report shows how illegal traders ‘are apparently shifting to heavily-taxed goods.’”

So at P35/pack tax, the degree of smuggling in 2018 alone was at least P20 B, and that's for the confiscated products alone, excluded are non-confiscated smuggled and fake cigarettes that were successfully sold. If those P20 B smuggled cigarettes were sold at P70/pack, then that means that some P10 B of potential tobacco taxes (half the price at P35/pack tax) for UHC became zero. Smugglers and criminals became richer, UHC became poorer. And that's for the confiscated tobacco alone, the unconfiscated should be several billions more.

(This photo is from https://www.bworldonline.com/japan-tobacco-wants-govt-prioritize-anti-smuggling-fight/) 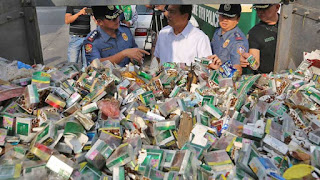 I think the "optimal tax" rate for tobacco is not P60/pack, not P90, not P500. Somewhere in the 35-40/pack until the smuggling loopholes are closed. If the loopholes remain huge, then huge smuggling will continue. If legal tobacco becomes P20/stick because of 90/pack tax, then illegal/smuggled tobacco can be sold at P4/stick or less. Cheap tobacco means more smoking will happen, not less. 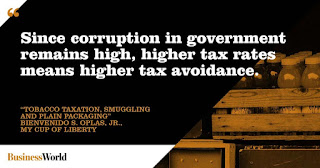 So since higher tobacco taxes lead to more smuggling, then the unintended #1 ally of smugglers, criminals, terrorists who produce and sell smuggled tobacco, plus their friends and protectors in govt and police are -- ironically, the advocates of #Taxtobaccotothemax?

The DOF officials who say that P73/pack is optimal (revenues are maximized while leakage and smuggling are minimized) are exactly the same DOF officials who said that PH inflation in 2018 would be only 2-4% (actual is 5.2%) and GDP growth 2018 would be 7-8% (actual is only 6.2%). Baka gumagamit sila ng bolang kristal in their projections and analysis.

A comment from Yul Dorotheo in my fb post:
"tobacco companies themselves are complicit in illicit trade."

Boom, so why don't they launch that #bantobacco campaign? Get them all, legal and illegal tobacco. But anti-tobacco groups also enjoy somehow from the huge tobacco taxes by the billions? Indirectly like huge consulting contracts with PhilHealth, DOH, WHO?

Other points from another friend:

On #1, the non-rich youth would smoke illegal/smuggled tobacco because these are cheap.
On #2, that statement vs this: "IPOPHL Director General Josephine R. Santiago said that... illegal traders ‘are apparently shifting to heavily-taxed goods.’”

So when will the anti-tobacco groups ever launch that #bantobacco campaign, 100 years from now while at the moment, big enjoyment from more tobacco tax money?

Smuggling proliferation is not exactly due to government incompetence but more of deliberate protection and tolerance of smuggling by certain govt agencies and officials in exchange for huge bribes. The bigger the tax, the bigger the corruption, the bigger the funds of criminal gangs, terrorist groups that produce, sell and protect the large scale smuggled tobacco, drugs and related products.

that P2 B+ tobacco smuggling in Brgy Portic, Bugallon, Pangasinan raided only last November. The 3-term Pangasinan Governor, his son Mayor of Bugallon, they live (or used to live) in that barangay. All these years they didn't know there is a multi-billion smuggled tobacco factory in the barangay?

Again, campaigners should go for #bantobacco so that both legal and illegal tobacco will be confiscated. #Taxtobaccotothemax only taxes legal tobacco, illegal tobacco is happily and plentifully peddled and sold, and smokers happily smoke cheap tobacco.


So long as the #bantobacco is not advanced because activists are begging for "more tobacco taxes please", they become indirect advocates for more smoking of legal tobacco, illegal tobacco does not pay taxes.
Posted by Bienvenido Oplas Jr at 12:52 AM