* This is my article in BusinessWorld last Monday, February 4, 2019.

The Senate is once again the battleground of public debates on many issues. This is because it is still deliberating its own versions of House Bills (HBs) passed on third reading, and the official campaign period will already start on February 12 — which means all congressional activities and meetings will cease and resume only after the May elections.

I checked the Senate website, the following are among the hot topic Senate Bills (SBs) scheduled for continuing debates this Monday and the rest of the week.

The House version looks more rational because it is based on the net income and margin of the mining firms.

“(In 2018) The interagency National Committee on Intellectual Property Rights (NCIPR) seized a total of P23.6 billion worth of fake goods, much higher than the 2017 level of P8.2 billion… cigarettes accounted for 85.81% of the value or P20.25 billion… IPOPHL Director General Josephine R. Santiago said that the report shows how illegal traders ‘are apparently shifting to heavily-taxed goods.’”

The “tax tobacco more” groups should be unhappy with this but now they want to further raise the tax to P60 or P90 per pack, and we can expect perhaps P40 billion or more worth of smuggled cigarettes.

Another report in BusinessWorld in May 1, 2018 said, “DoF warns cigarette smuggling may be helping finance terrorism.” So high tobacco taxes result in high tobacco smuggling that pays zero to UHC but gives more money to terrorism and criminal gangs.

Third, lowering the minimum age of criminal responsibility (MACR) from the current 15 years to 12 years old under HB 8858 and SB 1603, SB 2026. All are lousy proposals criminalizing 12 years and below for crime acts instead of parents or guardians.

When a child commits a crime repeatedly, like robbery or acting as drugs courier, and is caught several times, 100% the parents/guardians know and tolerate or encourage it, they must go to jail, the child should go through DSWD or LGUs reformation. There should be more focus on parental/guardians responsibility in rearing children.

And four, plenary deliberations on amending the Public Service Act (PSA) of 1936. HB 5828 and SB 1754 propose that two sectors, telecommunication and transportation, will be removed from public utilities where foreign capital is limited to only 40% maximum.

There seems to be no problem in liberalizing the transportation sector but there is problem in telecoms because of the entry of state-owned China Telecom as partner of Udenna Corp. of Dennis Uy in Mislatel as the third telco. There are fears of threats to Philippine national security if China Telecom will have a majority share over Mislatel.

Compared to our major neighbors in the ASEAN, the Philippines does not have enough infrastructure and investments in land/rail, sea/maritime and air/aviation sub-sectors. International maritime cargo here is expressed in twenty-foot equivalent unit (TEU). 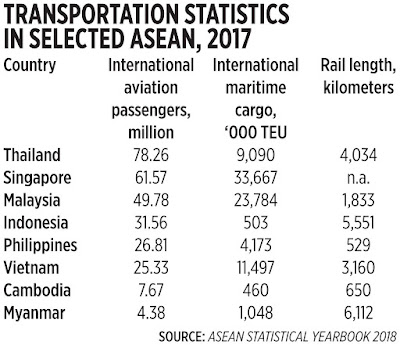 A compromise solution is to drop telecom from the PSA amendment now and proceed with transportation liberalization and allow foreign equity ownership above 40% up to 100%. Then file another bill in the next Congress to lift telecom from PSA’s “public utilities.” By then the public will have some ideas how China Telecom behaves in the country’s telecom sector.
----------------