“The natural effort of every individual to better his own condition…is so powerful, that it is alone, and without any assistance, not only capable of carrying on the society to wealth and prosperity, but of surmounting a hundred impertinent obstructions with which the folly of human laws too often encumbers its operations.”

The ideas of Adam Smith, John Locke and other classical liberals were indirectly discussed in the various panel discussions during the Asia Liberty Forum (ALF) held in Hilton Colombo, Sri Lanka last week February 28 to March 1. The ALF was mainly sponsored by Atlas (USA) and Advocata (Sri Lanka), with co-sponsorship by the Friedrich Naumann Foundation for Freedom (FNF) and other groups. FNF is a German foundation whose main work around the world is to help promote the value of economic freedom, free markets, human rights and political diversity.

The last panel on Day 2 was on “IPR for Innovation and Economic Growth” and speakers were Lorenzo Montanari of the Property Rights Alliance (PRA, USA), Philip Stevens of Geneva Network (UK), and Rainer Heufers of Center for Indonesian Policy Studies (CIPS). The panel was moderated by Harith de Mel of Advocata.

Mr. Montanari showed the three components of the International Property Rights Index (IPRI) — legal and political environment, physical property, and intellectual property — and the results of the 2018 Report. He emphasized the role of institutional arrangements and property rights protection in building a free, productive, prosperous and inclusive societies.

Mr. Stevens presented “The knowledge economy as a driver of sustainable economic development.” He showed data on the components of S&P 500 market value, the rising share of intangible assets vs tangible assets as follows: 17% vs 83% in 1975, 68% vs 32% in 1995, and 84% vs 16% in 2015. He further observed that “One third of the value of manufactured products sold around the world comes from ‘intangible’ capital.”

And Mr. Heufers observed that “For Indonesia to be free and prosperous” in the agriculture and food sector, the adoption of modern rice varieties protected by IPR has contributed significantly to greater food production in the country. 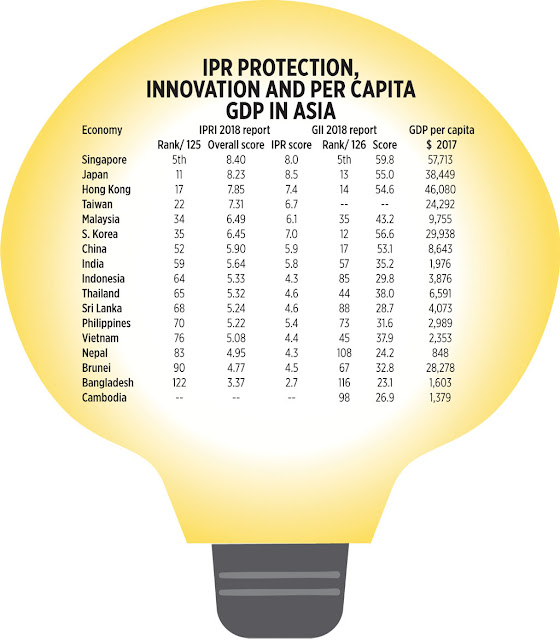 Notice the top seven countries and economies — they have higher global ranking in property rights protection, also in innovation index, and higher per capita income of at least $8,600 in 2017, higher sustained economic growth.

The Philippines has low rank in both IPRI and GII and low per capita income. Improving the country’s global ranking and score in at least these two reports will send a good signal to both local and foreign investors and traders, that their investments and branding here will be respected and protected.

There are efforts in Asia though to circumvent IPR protection. Like moves to issue compulsory licensing (CL) and kill the patents of newly-invented and successful medicines. Or impose plain packaging and kill trademarks and brands of certain products deemed “unhealthy” like tobacco, soda and sugary foods.

These anti-IPR moves downgrade the fact that people in general are living longer, healthier and freer. Life expectancy at birth keeps rising, mortality rate across ages keeps declining, and people engaged in “dangerous” hobbies and sports like sky jumping, downhill cycling and motorcycle stunts is rising. Threat on companies’ IPR on their invention and corporate branding is also a threat on the overall investment environment. Governments should avoid such populist and anti-liberal policies.
---------------