Some tweets below, lifted from #AsiaLF19:

“In a short space of time @advocatalk has established itself as THE liberal voice on economic affairs in Sri Lanka.” .@razeensally, an advisor to Advocata Institute, discusses the role of ideas in

“No one has benefited from ideas of economic liberty as much as the asian region” - @razeensally delivers welcome remarks kicking off. 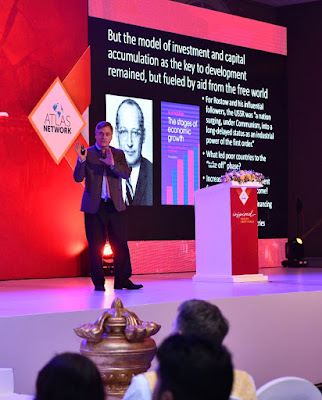 “Capitalism has problems. But it also is the greatest idea that humanity has ever had. It allows people to escape poverty.” -Roy Spencer of @ConsciousCP during his cornerstone talk.

“We all know the saying of whether you give a man a fish or teach him to fish. But what happens if the government says fishing is illegal? Before you can teach to fish you have to be allowed to fish.” -@dhananath of @advocatalk during his cornerstone talk.

Laurence Todd of @IDEASMalaysia discussing enforcement of contracts in MY and Asean.

“Think Tanks can lead the conversation and act as a middle person between the small businesses and government, since their voices aren’t alway heard.” -@AiraAriana of @IDEASMalaysia during a concurrent session on Removing Barriers to Entrepreneurship.

Last night, below. We were batch mates in the Mackinac Leadership Conference in Midland, Michigan, early April 2004. Then we also attended the Atlas Liberty Forum in Chicago a week after, nearly 15 years ago. Lisa Roberts and Parth J Shah. Lawrence Reed is not here in Colombo so I asked Brad Lips to join us.

Rainer Heufers of @cips_id speaking, "Charting a course of Economic Freedom in Asia".