BWorld 297, The economics of coal

Most anti-coal activists would resort to disinformation and deception to advance their ecological leftist agenda and in the process, deprive energy consumers of the opportunity to have cheaper, stable and reliable 24/7 electricity, badly needed to sustain fast growth and generate more jobs for the people.

One paper spreading fake news is an opinion piece, “Consumers should not pay the price for risky coal deals” by Sara Jane Ahmed published in BusinessWorld last week, February 20, 2019. I quote three of her statements.

(1) “Coal has become toxic… In India, China, Malaysia, and, most recently, Vietnam, a trend of cancellations and delays involving new coal plants has emerged.”

Coal remains attractive not only for the four countries mentioned but other major economies in the world, including “greenies” US, Germany, Australia and Japan. Until 2017, these four developed countries were reliant on coal power from 31% to 61% of their total electricity generation. For India, China, Malaysia and Vietnam, coal reliance was 45% to 76%. In the Asia-Pacific overall, coal supplied 60% of total electricity production. 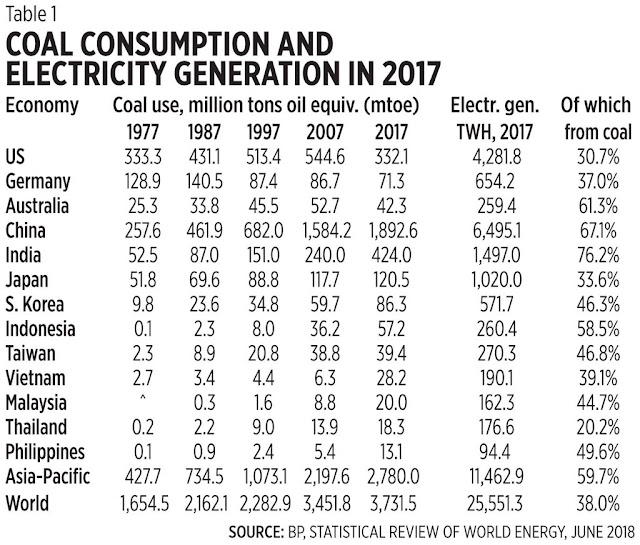 The real “toxic energy” would be candles and gensets because of frequent blackouts. Candles mean more fires and destruction of property while gensets running on diesel mean more air and noise pollution.

(2) “SMC Global Power Holdings Corp., plans to forge ahead with the construction of a 300-megawatt (MW) coal plant in Negros Occidental…. insurance and reinsurance companies… will no longer insure coal.”

San Miguel Energy sees the power deficiency in Negros so its main insurance for building a coal plant is that its output will be quickly used by the 5M consumers (4.4M in 2015) as electricity demand keeps rising.

The main source of electricity in Negros is geothermal from Palinpinon, Negros Oriental (by EDC). Before and even after the many solar farms were constructed in Negros, regular and rotating blackout was the norm.

Luckily there are saviours somewhere — the coal plants from Cebu (Toledo and Naga). Negros imports energy from Cebu which has similar population as Negros but power generation is nearly 2x that of Negros. An anti-coal ideologue opposing a new coal plant in Negros but silent about coal plants in Cebu and Iloilo that give lights to Negros. 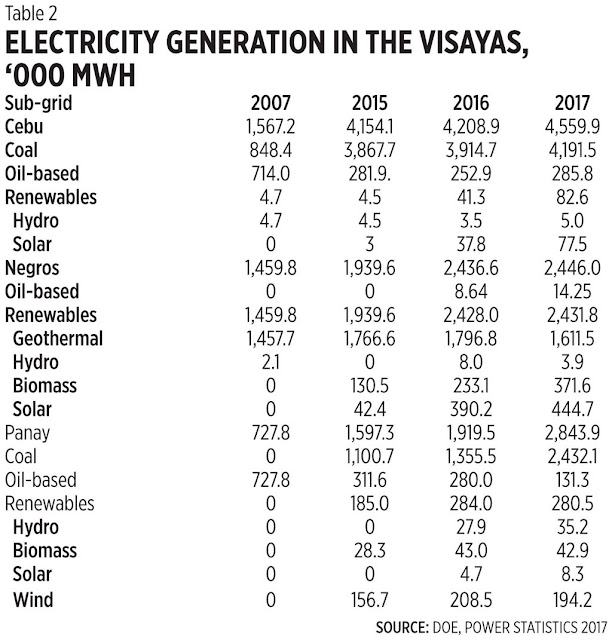 (3) “coal as it becomes “stranded”… happening with increasing regularity to coal plants, including those from our neighboring countries, which are becoming obsolete in the face of cheaper renewables…”

Dr. James Roumasset, a famous environmental and energy economist from the University of Hawaii and frequent visitor and writer in Philippines economics events, made this observation:

“If stranded costs are really happening with regularity, it’s because of uneconomic mandates and subsidies favoring renewables. In California, this is called the “missing money” problem. But a more accurate term would be “stolen money.” Those “progressive policies” rob from the IPPs and poor consumers and give (a far lesser amount) to rich consumers who can afford panels and to politically well-connected renewable providers.”

The Arangkada Philippines Project (TAPP) in its paper, “Seven Big Winner Sectors: Power” made a good Recommendation #12, “Develop a power plant on an isolated island such as Semirara with a supply of indigenous coal and deepwater access to international coal sources… close the loop of Bicol, Samar, Leyte, Cebu, Negros, Panay, Semirara, Mindoro and Batangas.”