BWorld 299, Capitalism and freedom in Asia

“The over-all speed of advance will be increased by those who move fastest. Even if many fall behind at first, the cumulative effect of the preparation of the path will, before long, sufficiently facilitate their advance that they will be able to keep their place in the march.”

Colombo, Sri Lanka — The annual Asia Liberty Forum (ALF) 2019 conference is held this week February 28 to March 1 in this South Asian country. To discuss and promote capitalism and free market policies may look ironic in a country that is officially named “Democratic Socialist Republic of Sri Lanka.” Yet this country has more pro-market policies than many supposedly capitalist Asian economies.

The ALF is mainly sponsored by the Atlas Network in the US, and co-sponsored by a local free market think tank or institute in the host country. In Sri Lanka, the local host is Advocata Institute, a newly-formed and dynamic institute. Among the co-sponsors are the Friedrich Naumann Foundation for Freedom (FNF, Germany) and Action Institute (US).

The theme was inspired by the economist Milton Friedman’s 1962 book, Capitalism and Freedom, wherein he argued that economic freedom is both a necessary and sufficient condition for political freedom.

When I arrived on a midnight at Bandaranaike International Airport, 30-plus kilometers from Colombo’s city proper, I was surprised to find a huge airport, with thousands of passengers arriving and departing in that late hour. Perhaps as busy or busier than Manila’s three international terminals combined.

To see the challenge of more capitalism and market-oriented policies in Asia, I checked some macroeconomic data, focused on the six South Asian and six ASEAN economies with similar populations. I excluded Singapore, being an outlier as it is a very developed economy, also Thailand (69.3M), Myanmar (54.3M), Malaysia (32.4M).

Sri Lanka has a modest GDP size and its per capita income of $4,073 in 2017 is actually higher than that of the Philippines’ $2,989. But it does not attract much foreign direct investments (FDI) compared to socialist Vietnam or even Cambodia (see table). 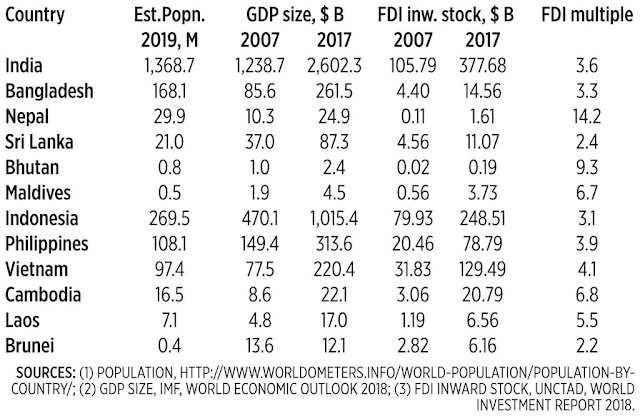 So, many Asian economies are still ideologically and economically challenged to optimize their potentials under capitalism, market-oriented and globally-integrated policies – what Singapore, Hong Kong, South Korea, Taiwan, and Japan have achieved.

The fetish on anti-inequality, forced equality and anti-private property, a soft and implicit advocacy for socialism that Friedrich Hayek has warned, should be secondary to the goal of fighting poverty via more free enterprise, more economic freedom.

It is good that Atlas continues the global and continental discussions on the subject, and it is equally kind for FNF to help the free market groups, institutes and individuals in Asia. My participation in the ALF is made possible by the support of FNF from 2016 (Kuala Lumpur), 2017 (Mumbai), 2018 (Jakarta) to this year in Colombo. FNF also sponsored my participation in almost all EFN annual conferences and meetings in many Asian cities from 2004 to 2017.

A key staff member of the FNF in organizing the annual EFN conferences before and now co-sponsoring the ALF is its Project Director, Pett Jarupaiboon. Pett is a cool, warm, behind-the-scenes guy who ensures that things run as smoothly as possible. Now Pett is leaving the FNF next month to pursue another career and finish a PhD program.


Hats off, Pett and FNF. You are doing good in helping Asia and its billions of people realize the value of economic freedom and, over the long term, attain more wealth and prosperity.
----------------