BWorld 535, The effects of Biden and sanctions on energy and commodity prices 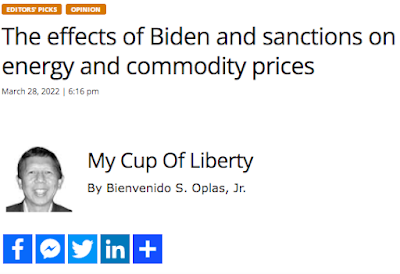 US President Joe Biden has already been in the White House for 14 months, and Russia’s invasion of Ukraine and the US-led economic sanctions against it have just marked one month, and things are worsening. Here are 10 emerging trends, global and national.

One: Biden and the US Democrat Party campaigned, among other issues, for a war on fossil fuels. And on Day 1 of his administration, Jan. 20, 2021, he announced a halt to oil-gas drilling in federal lands, and the killing of the Keystone XL pipeline that would bring some 800,000 barrels per day of Canada crude oil to the US. See these reports:

Since a war on fossil fuel also means a war on internal combustion engines (ICE) that use gasoline or diesel, it signaled a rise in prices of metals largely used in electric car batteries like lithium and cobalt, which rose 118% and 58% over the same period.

Three: World prices of fossil fuels and uranium continued rising until pre-invasion day while the solar and wind index declined. The planet experienced a generally calm, less windy 2021 and the wind farms of many countries, especially Europe, produced little energy so they endured high gas-oil-coal prices to keep the lights on and avoid blackouts.

Four: The invasion on Feb. 24 quickly pushed upwards the prices of many commodities, especially oil and gas because Russia is the number one source of these energy products for many countries in Europe. The percent changes in prices from Feb. 23 to March 25 were: 26% and 22% for WTI and Dubai crude, 37% for coal, and 34% for uranium. Nickel prices jumped 42% while wheat rose 24%, sending alarms calls of “food shortages” in many countries. 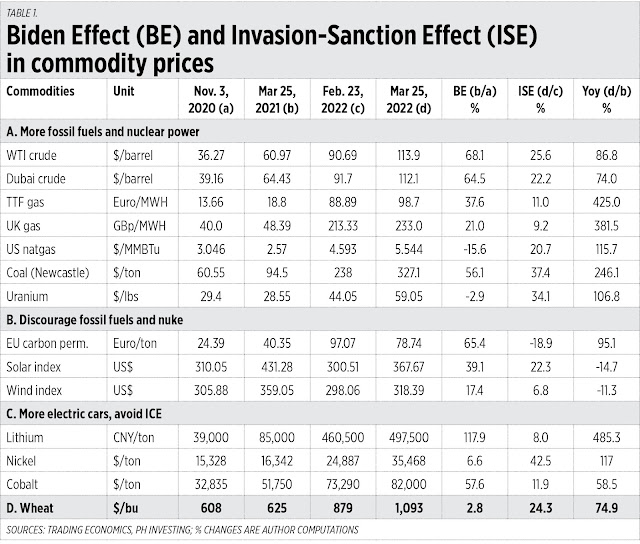 The main target of the US-led sanctions is Russia, to impoverish it quick, but the law of unintended consequences when things are politicized always kicks in and the rest of the world is adversely affected. 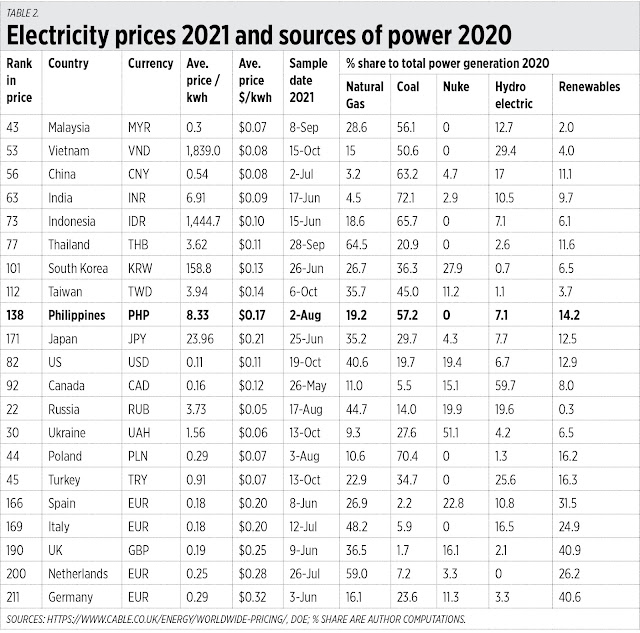 Seven: Since the Philippines was already bullied by the environmental, social and governance (ESG) lobby to stop building new coal plants, it should consider turning to nuclear power, particularly small modular reactors, for islands like Palawan, Mindoro, Masbate, Bohol.

TOKYO AND METRO MANILA NEAR BLACKOUT

Eight: Tokyo nearly experienced a blackout on March 22. The temperature dropped and demand for electricity rose while some power plants were out. The Japan electricity network sent extra power to Tokyo. Japan has suffered from thin reserves for several years now as they retire many coal and nuclear plants while joining the ESG bandwagon of more intermittent power sources.

Japan introduced a feed-in tariff (FIT) program in 2012 to boost solar power. Many backup and reserve thermal power plants became more expensive to operate as intermittents were given priority in grid dispatch. And Japan’s power reserves become even thinner.

The Philippines implemented the FIT provision (guaranteed high price for 20 years) in 2012 and many solar-wind plants were built. Since they have priority dispatch in the grid, they also displace some reliable thermal plants. This is often praised as “merit order effect” that results in lower prices in the Wholesale Electricity Spot Market (WESM). This is fiction because the frequent displacement of dispatchable thermal plants in the grid means some or many of them will be gone soon, like what happened in Japan. And when some big plants go offline due to natural calamities or unscheduled shutdowns, reserves are thin and blackouts will be the result. The most expensive energy is one that is not there, absent, zero. Then people will use more candles and have more fires. Or use expensive gensets and diesel and create more air pollution.

Ten: Then there is the continuing problem that is the only remaining national monopoly in the country, the National Grid Corp. of the Philippines (NGCP). In last Saturday’s yellow alerts, five power plants, with a combined capacity of 1,193 MW, had a “forced outage due to undisclosed reason” simultaneously at 6:17 p.m. It does not look like a generation problem but a transmission problem because they went out all at the same time, on the same day.

About late January this year, the NGCP announced that it will get more firm contracts for ancillary services (AS) to augment reserves. It was good news — thank you NGCP. The bad news is that nothing seems to have happened after that, and so we are back to having yellow-red alerts in the next two to three months.

We should have less politics in energy policy. There should be no favoritism in energy technology, and no priority dispatch. Companies should bid based on the lowest price at the most stable supply for the consumers. And no more monopoly please, especially in the nationwide transmission system.
--------------