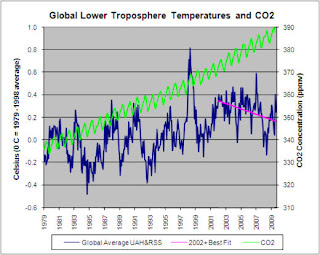 Honest people change their position when the data that stare them in the face are contrary to what they previously thought. Dishonest people don’t. They only make totally different interpretations of existing data.

Above is a chart comparing global temperature and carbon dioxide (CO2) levels in the atmosphere over the past 30 years, latest figure is August 2009. Temperature is from satellite data, UAH and RSS, measured at the troposphere, 8 kms. from the surface of the Earth. Data is from Mauna Loa, Hawaii.

The above chart shows one glaring fact: Global cooling continues despite increases in CO2 concentration in the atmosphere. From January 2002 to August 2009, the best-fit line shows cooling of 0.24 C, whereas CO2 concentration is now close to 390 parts per million (ppm), from only 285 ppm at the start of the Industrial Revolution two centuries ago, and around 385 ppm just about two years ago. But even at 390 or even 400 ppm, this ratio is still very small, only 0.04 percent of total gases in the atmosphere.

This year, it has been mostly cloudy and often raining. Like the first 12 days of this month. There were two typhoons (local names “Labuyo” and “Maring”) that entered the Philippine area of responsibility this month. Although they did not make any landfall, both typhoons dumped lots of rain in Luzon, Metro Manila and almost the entire country, causing heavy flooding and landslides in many areas, and causing several casualties.

Sunspot activities are indicator of the strength, or weakness, of the Sun’s magnetic field. Weak solar magnetic field results in few or zero sunspots and weak solar wind, etc. Now there are plenty of galactic cosmic rays coming from exploding stars that travel in the universe, some of which reach our planet’s atmosphere. Such cosmic rays help catalyze the formation of low-lying clouds. When there are more of them in the atmosphere, more low-lying clouds are formed. And there are more of them when solar magnetic field and solar wind is weak to push the cosmic rays away. When there are plenty of low-lying clouds in the sky, (a) direct sunlight is blocked from reaching the Earth’s surface and is reflected back to the outer space, and (b) more rains are falling, resulting in global cooling.

At solar maximum, solar wind would be traveling at around 600,000+ kms per second. With the current prolonged solar minimum, solar wind speed is only around 300,000 to 400,000 kms per second. According to one Australian scientist, Dr. David Archibald (www.davidarchibald.info), there is a lag of 1 year from sunspot activities to the formation of low lying clouds. A deep solar minimum became more pronounced from August to December last year. Many scientists including those from NASA thought that solar cycle 23 (one cycle would average 11 years to finish then move to another cycle) was already over, so that by January this year, solar cycle 24 was suppose to have started. They expected an uptick of solar activity. The reverse happened, the deep solar minimum continues up to these days.

So the current frequent cloudy skies – despite the fact that an El Nino is occurring this year – could be explained by the weak solar magnetic field late last year. And since the deep solar minimum continues up to this year, then we can expect that cloudy skies, frequent rains and colder climate will extend up to next year, and the coming decades. It has been the behavior of the Sun that in a solar cycle with deep and prolonged minimum sunspot activities, the next two cycles (ie, solar cycle 24 and 25, corresponding to 2.5 decades) will also be weak. And so, global cooling is expected to last for the next 2 to 3 decades.

Meanwhile, many governments around the world and the UN are busy with almost bi-monthly expensive global meetings in preparation for the UN Framework Convention on Climate Change (UN FCCC) meeting in Copenhagen, Denmark, this coming December. The goal of such big meetings is for various governments to plan and sign a new global climate deal that will succeed the Kyoto Protocol which will expire in 2011 or 2012. They just held a meeting in Bonn, Germany last month. Their next meetings will be in Bangkok, Thailand, this coming September 28 to October 9, and another meeting in Barcelona, Spain, on November 2 to 6, before they move to Copenhagen in December for the penultimate meeting.

The main goal of those frequent and expensive global meetings, is for “climate negotiators” of those governments and the UN to curtail as much carbon dioxide emission into the atmosphere as this gas is believed to be the main cause of what they call as “man-made (or anthropogenic) global warming.”
These government and UN negotiators believe that there is already a "consensus", that “scientific debate is over”, as signified by the UN Intergovernmental Panel on Climate Change (IPCC) reports, so that politics and politicians will now take over to curb as much carbon emission as possible to “save” the planet. For the UN IPCC and global politicians, our Sun is a static and non-changing star whose job is only to give sunlight during daytime.

It is the non-recognition of natural factors – the Sun’s magnetic field and sunspot activities, volcanic eruptions and geologic changes, the ocean – as the main drivers of the Earth’s climate that betrays the evil design of those governments, the UN and the various environmentalist groups. Their grand design is to create and tighten more environmental regulations, to enact new carbon taxes, and to impose ecological protectionism. In short, to arrogate more political power into their hands, to collect more money for them and their favored corporations and banks which are engaged in carbon offsets and carbon trading.

Since there is no scientific consensus yet as more scientific data and studies that discredit the man-made warming theory of the UN IPCC and various governments come up, then those expensive global meetings and the forthcoming Copenhagen meeting, should be scrapped. They are unnecessary and only prolong the big scam that they themselves have invented.

The pre-defined political agenda of governments and the UN – to regulate and ration energy sources, to collect more climate-related taxes, to play God to "save" the planet – becomes more indefensible with each passing days and months. They cannot regulate the Sun's magnetic field, they cannot regulate the cosmic rays that come from outside the solar system, so they have to trivialize and de-emphasize the role of those natural factors. There's no money and additional political power for them if they accept that the Sun is main driver of the planet's climate, whether warming or cooling.

Let's have clean air, clean water, clean environment, fine. Regulate lead, mercury, soot, carbon monoxide, methane, CFC, etc., only for their own sake, and not say to "save the planet" because the planet is never in danger.
---------

Last week, I wrote this:

A friend referred me to this climate alarmism news report,
http://www.reuters.com/article/latestCrisis/idUSN02547411

It says how the Arctic ice is slowly melting because of global warming.

With the Copenhagen meeting just 3 months away, all the panic is setting in.
Bureaucrats need hundreds of billions of $ of carbon tax, like Obama's cap and trade energy bill worth around $7.5 trillion from 2012-2030, or around $317B/year on federal carbon taxes alone, on top of existing environmental taxes, on top of carbon taxes by various states like California; hundreds of billions of $ in carbon cap and trade (was $128 B in 2008, from private corporations alone in EU and Japan), of several billion $ of subsidies to wind farms, solar farms, etc.

Lie if they must, demonize a useful gas CO2 (the gas that we humans exhale, the gas that plants and crops need) if they must, scare the world as much as possible, so they will get the carbon regulation that they need. Goldman Sachs and many other big banks are too happy to join the bandwagon because they are among the biggest bank-traders of carbon trading.

Several years ago, the world had tech bubble burst. Recently, we had housing bubble burst. And soon, a carbon bubble burst. Another financial disaster in waiting. A non-commodity like the gas that we exhale is now a commodity that is traded in billions of $, that will be taxed by governments by the trillions of $.

Here's one simple but clear paper written by a chemist,'
http://tech-know.eu/uploads/Open_letter_to_Gordon_Brown.pdf

His paper has a short discussion about the Sun-climate link, and why CO2 hardly affects global climate. And if it does, it's for a useful purpose -- helping more plant growth, more agricultural productivity, more trees, more flowers.
Posted by Bienvenido Oplas Jr at 12:51 PM

So you dispute the accuracy of the "Greenhouse Effect" which assumes a positive correlation between higher GHG levels and corresponding temperature levels?

based on your own posting, if you continue to dispute this - you are dishonest...

Hmmm, the chart I showed says it clearly: global climate cools while CO2 concentration rises. Conclusion: CO2 has little or zero effect on the Earth's climate.

There are a number of graphs there showing clear positive correlations between solar activity and the Earth's climate. And CO2-climate link is suspect.

Until recently, one of the many analyses of tropospheric temperatures did show very little warming and was in direct contradiction to model predictions that say the troposphere should warm significantly in an enhanced greenhouse environment.

It turns out that additional errors were uncovered and the MSU Satellite temperature analysis now shows warming well in line with model expectations. Real Climate has a good rundown of the technical details for those with the stomach for it. In short, this long-running debate turned out to be a great validation of the models and a real death blow to the "earth is not warming" crowd.

It will not have escaped the notice of keen observers that the satellite/model discrepancy has been used extensively in certain circles to cast doubt on the models, surface temperature record and our understanding of basic physics. Some recent examples for instance, used the UAH 2LT record absolutely uncritically (despite the fact that there have been many previous revisions, and that other analyses give very different results). Recently, one of these authors was quoted as saying:

Since the satellites now clearly show that the atmosphere is warming at around the rate predicted by the models, we will report on his no-doubt imminent proclamation of a new found faith in models as soon as we hear of it…

Your CONCLUSION is that CO2 has an inverse relationship with global temperature, or is not related to temperature at all.

Data about cooling trend and rising CO2 concentration, it's on the graph shown on this post. Right below the title of this post. Climate data sources are from UAH and RSS satellite data.

About realclimate.org, I trust better the following sites instead:

Excellent post! With all the scientific evidence that has come out over the last 2 years, you'd have to live with your head in the sand not to question the validity of AGW.

I'm curious, the east coast of the United States has been noticably cooler this year. From your experience, how has the weather been in Manila?

I am preparing for a very cold winter.

We have almost zero summer here in the Philippines. Summer months are March to May. But cold front, as announced by the govt's weather bureau, PAGASA, started in Nov. 08 up to middle of April 09! Mostly cloudy days in "summer", and regular rainy season started in the 2nd half of April, instead of June. Two typhoons each in April and May.

These days, we hardly see the Sun, mostly cloudy days. The Sun would show up (if ever) in the morning, but by afternoon, it's covered by clouds. And yet we're close to the equator!